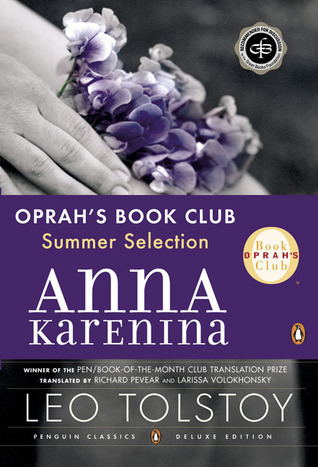 Described by William Faulkner as the best novel ever written and by Fyodor Dostoevsky as “flawless,” Anna Karenina tells of the doomed love affair between the sensuous and rebellious Anna and the dashing officer, Count Vronsky. Tragedy unfolds as Anna rejects her passionless marriage and must endure the hypocrisies of society. Set against a vast and richly textured canvas of nineteenth-century Russia, the novel’s seven major characters create a dynamic imbalance, playing out the contrasts of city and country life and all the variations on love and family happiness.

This is one of the most highly regarded pieces of Russian literature, and felt like quite a daunting prospect for me personally as I have previously tried (and dismally failed) to finish this novel. It revolves around the lives and loves of seven main characters in Tzarist Russia, all with their little quirks and foibles as they navigate the politics of the age, and explores their points of view on marriage, love and happiness. We first meet our title character Anna Karenina at a train station, (this is quite important as we also leave her character at a train station) where she is meeting her brother “Stiva” Oblonsky. I found Oblonsky a really interesting character, he is a bit of a rogue, and has an eye for the ladies, but he is written in such a way that he seems to have a certain charm, and it’s quite hard not to like him. Oblonsky has begged Anna to come and stay with him for a while, he is experiencing serious marital difficulties after his wife Dolly found out about his affair with the governess. Dolly refuses to talk to him, and Oblonsky hopes that Anna will manage to talk her round. Anna also meets a cavalry officer at the station by the name of Vronsky, who will play a huge part in her life, becoming her lover as she desperately tries to navigate her way out of an unhappy marriage to Karenin. The Russian politics of this time are so severe that Anna becomes labelled as a “fallen woman,” and is shunned by all notable Russian society. Her husband also dithers over agreeing to a divorce, partly to punish her for her infidelity, and partly because it would greatly affect his position as a government official.

Another notable storyline in the novel is that of Levin and Kitty, the latter having refused his proposal on the first offer due to her having designs on marrying Vronsky. Levin is plunged into a pit of depression, and then when Vronsky hooks up with Anna, Kitty also falls ill with the shame of it all, realising that Vronsky had no intentions of marrying her. I did enjoy Kitty as a character, and felt pleased when everything was resolved between the two and they fell in love. However, I found it incredibly frustrating at points, as they are both plagued with self-doubt, which also makes them doubt the true feelings of their significant other. Yes, you do love each other… get a grip! Anna possessed a similar character defect, where she questions Vronsky’s intentions, although there is a more serious deterioration and mental breakdown in her case.

So, on my second reading of the novel I have to conclude that I enjoyed it a lot more. Tolstoy manages to write characters that are so fascinating that the reader becomes immersed in their world with no plan of leaving. I still found some parts quite challenging, and tended to drift off slightly when politics or farming was discussed, which I’m afraid I don’t have much interest in. I can certainly understand why the novel is so celebrated though, and am very glad I managed to finish it.