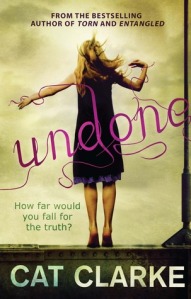 Jem Halliday is in love with her gay best friend. Not exactly ideal, but she’s learning to live with it.

Then the unspeakable happens. Kai is outed online … and he kills himself.

Jem knows nothing she can say or do will bring him back. But she wants to know who was responsible. And she wants to take them down.

A searing story of love, revenge and betrayal from a bestselling author.

I first came across Cat Clarke through my sister and fellow blogger Chrissi Reads, and this is another one of her novels I have been meaning to get round to for a while, so June 2014 Chrissi Cupboard month gave me the perfect opportunity. Undone is the third novel from this author and probably my favourite one so far – Cat Clarke just keeps getting better and better in my opinion. Our main character is a teenage girl called Jem Halliday who falls in love with her best friend and neighbour Kai whom she grows up with, and apart from her family, is probably the person who knows her best. Now Kai turns out to be gay which is a bit of a shame for Jem, as in every way he appears to be the perfect guy for her. They have such a close relationship however that it does not come between them and is merely a minor detail for Jem that does not change the person Kai is.

Then Jem and Kai attend a party where a video is taken of Kai in a compromising position and publicly posted, meaning that the entire school body is now aware of his sexuality. This in turn leads to Kai receiving some terrible messages, taunting and threatening him to such a degree that it pushes him over the edge (quite literally) and sadly, he takes his own life. Jem is understandably devastated to lose her best friend in such a way, and has thoughts of ending her own life to end her misery until she receives a bundle of letters from Kai that were written just prior to him committing suicide, instructing Jem to open and read one each month.

The letters from Kai provide Jem with some comfort as he attempts to try and help her get on with her life, proposing that she should carry out a single task each month (like buying something from the shop she has always hated, wearing different makeup etc) but Jem remains bitterly angry about the way Kai was treated and vows to get revenge on the individuals that were responsible for his suicide. The rest of the novel concentrates on Jem integrating herself with the popular crowd to find out exactly who should be blamed and humiliated for what happened to her best friend.

And yes, the letters written post-death did squeal “P.S. I Love You,” slightly, but stay with it as Cat Clarke prepares to take you into a world that is a bit darker, much more cynical and chock a block full of action. I was instantly transported back to the “best (worst?) days of my life as we realise how cruel teenagers can be, and how a single comment or action can not only crush your self-esteem but have dangerous consequences for our mental health. My sister did warn me about the ending but when it came (no spoilers, don’t worry) my mouth was literally hanging open, and the story cycled round my brain for days afterwards as I tried to come to terms with what had happened. The author has an amazing way of creating characters that you can relate to even if you wouldn’t necessarily take the same path. She also feeds into the teenage psyche in a very admirable way and it certainly left me with a few chills, remembering my own adolescence. Basically, I feel that this author can do no wrong and I can’t wait to read her next offering – A Kiss In The Dark. 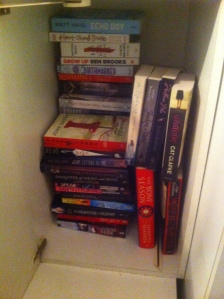 My lovely sister and fellow blogger Chrissi Reads gives me books on a regular basis, and as she reads at the speed of light I have had to acquire a cupboard in my bedroom purely for her books. Unfortunately, with all my other books and huge TBR pile, I’m not getting through them as fast as I’d like so I would like to dedicate the month of June to reading books purely from the Chrissi Cupboard. I will obviously be reading my short story every week and our Kid-Lit book for the month of June, but I’m hoping the majority of books will be from this cupboard. Here are the first ten I am planning to read and review:

Shadow and Bone by Leigh Bardugo

The Knife Of Never Letting Go by Patrick Ness

The Madness by Alison Rattle

Under The Never Sky by Veronica Rossi

Shadows On The Moon by Zoe Marriott

I’m really excited to get started on this little bunch, looks like many hours of happy reading ahead! For Chrissi Reads fabulous blog please click HERE.