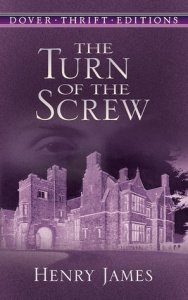 The story starts conventionally enough with friends sharing ghost stories ’round the fire on Christmas Eve. One of the guests tells about a governess at a country house plagued by supernatural visitors. But in the hands of Henry James, the master of nuance, this little tale of terror is an exquisite gem of sexual and psychological ambiguity. Only the young governess can see the ghosts; only she suspects that the previous governess and her lover are controlling the two orphaned children (a girl and a boy) for some evil purpose. The household staff don’t know what she’s talking about, the children are evasive when questioned, and the master of the house (the children’s uncle) is absent. Why does the young girl claim not to see a perfectly visible woman standing on the far side of the lake? Are the children being deceptive, or is the governess being paranoid? By leaving the questions unanswered, The Turn of Screw generates spine-tingling anxiety in its mesmerized readers.

The Turn Of The Screw was originally published in 1898 and can be described as “a gothic ghost story novella.” The author, Henry James, an American-born author was at the forefront of writing “different” novels in this period where he explored interior monologue, unreliable narrators and consciousness. He is probably best known for this novella and for his novel The Portrait Of A Lady, which I am yet to read. This tale opens on a group of friends who are sharing ghost stories one evening and The Turn Of The Screw is one of the stories which is offered up by a gentleman who promises to chill and delight the group. The story is narrated from the point of view of our main character, a young woman who is taking up the post of a governess to look after two children in a secluded country home. She is interviewed by the uncle who takes responsibility (but not TOO much responsibility, he enjoys his life in London too much for that!) for his nephew and niece, Miles and Flora after the death of their parents.

The governess is quite taken with her employer and is excited, albeit a little anxious to take up her new role. On meeting the children however, it seems she has nothing to worry about. Miles and Flora are angelic, adorable and affectionate children who immediately put the governess at ease as she begins to relax into her position. But of course, all is not as it seems, and strange things begin happening within the property. Miles returns home earlier than expected, expelled from his school with a letter from his headmaster stating that fact. Unfortunately, he will not talk about the reason behind his expulsion and the governess who finds herself utterly charmed by the boy, lets the matter lie. Then she begins to see two strange presences who keep appearing and disappearing in different places in the property. The children claim not to see them when questioned, however the governess begins to find it hard to believe them and incidents occur that leave her wondering if they are quite so angelic as they seem. Who are the spirits and what are their purposes? Is there real “evil” in the house or even in the children? Or is everything a complete figment of the governess’ imagination? The author has us wondering right until the end of the story – which is also completely ambiguous, leaving the reader to make up their own mind.

I was very excited going into this story, having heard it hailed as one of the best (and scariest) ghost stories of all time. Apologies to anyone who loves this book, but I was bitterly disappointed. Sure, there were a couple of eerie moments and I think Henry James drew the reader in with some fascinating characterisation of the children, but I’ve read scarier and better (The Woman In Black by Susan Hill, for example). I found the opening of the story, where friends are telling each other thrilling tales very dull and the entire way through it felt like I was just waiting for it to get better. The rating I have given it is based on the strength of the writing and beauty of the vocabulary alone, I’m afraid The Turn In The Screw just wasn’t for me. This may be because I had already over-hyped it in my own mind, or perhaps I didn’t appreciate the subtle nuances of the tale enough. If you agree or disagree with me, let me know! It’s definitely a good book for discussion if nothing else.