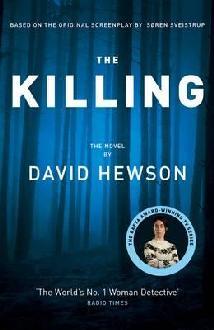 Sarah Lund is looking forward to her last day as a detective with the Copenhagen Police department before moving to Sweden. But everything changes when 19-year-old student Nanna Birk Larsen is found raped and brutally murdered in the woods outside the city. Lund’s plans to relocate are put on hold as she leads the investigation along with fellow detective Jan Meyer. While Nanna’s family struggles to cope with their loss, local politician Troels Hartmann is in the middle of an election campaign to become the new mayor of Copenhagen. When links between City Hall and the murder suddenly come to light, the case takes an entirely different turn. Over the course of 20 days, suspect upon suspect emerges as violence and political intrigue cast their shadows over the hunt for the killer.

I normally like to read books before I watch the television/film adaptation but with this book funnily enough the TV series came first. This was originally a Danish drama, written by Soren Sveistrop and when released over in the UK, it became somewhat of a cult phenomenon, winning a BAFTA and an International Emmy and considerable critical acclaim. Our main character, police detective Sarah Lund is leaving her job in the Copenhagen Police Department to move to Sweden with her partner Bengt and her son Mark. However, a terrible rape and murder of a nineteen year old girl makes her want to stay – until she has solved the case that is, and the perp is behind bars. Unfortunately for Sarah (and her incredibly patient partner) the case turns out to be a lot more complicated than expected… what is the political link to the crime? Will Troels Hartmann do anything to be elected as Mayor? Suspects are fingered, evaluated, dropped, perhaps re-evaluated, dropped again. By the end of the book (that is if you haven’t seen the TV series) you will most likely be screaming at the pages “Who killed Nanna Birk Larsen?!”

I have only seen bits and pieces of the original Danish TV production behind this story, so I was able to make a few comparisons between the two but nothing very concrete. Apparently the ending was different in the TV show, but as I didn’t see it I’m not able to comment on that particular fact. I tried to come to this novel with an open mind though and try to judge as if I had heard nothing about the series it is based on. With this in mind I have decided that this is a decent crime novel with plenty to spark the interest of a crime-loving reader. We have some great characters – our heroine and black and white/white and black jumper lover Sarah Lund, who feels passionately about what she does, but obviously has some deep-rooted personal issues. Jan Meyer is her “sidekick,” and to be honest, I didn’t warm to him particularly at the start, perhaps partly because he came across as quite resentful and aggressive. However he did grow on me towards the end of the book, so there’s still hope! I also loved the characters of Nanna’s parents, who are deeply in love, but their marriage is almost torn apart after the murder of their child and they have to slowly learn to trust and respect each other again for their relationship to survive. The plot of this novel is amongst one of the most convoluted I have ever seen in crime fiction – the reader is certain they have figured things out then BANG, another twist in the tale appears. Sometimes, this could get slightly confusing and irritating, but it gripped me enough to keep on reading, the sign of a good story. I am also interested enough to want to go back and watch the first series of The Killing to analyse it in further detail compared with what I have read. Oh, and I’ll also probably read The Killing II. At some point, but there’s no rush.

It’s that time again… WWW Wednesday. Thanks as ever to MizB at Should Be Reading for hosting.

What are you currently reading?

I’m about 200 pages into this 700 page novel, based on the successful Danish television series. Going good so far, although I’m getting slightly annoyed with one recurring phrase which I’ll talk about in my review!

The second book in the Delirium series, I enjoyed this but not as much as the first. Look out for my review coming soon!

This is a book club non-fiction read and looks really interesting, looking forward to starting it.

What are you reading this Wednesday? Please leave your link and I’ll come take a look! Happy Reading Everyone!