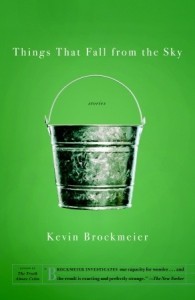 What’s Space all about?:

Space is told from the perspective of a widower who is not only struggling with his own grief but trying to deal with his son’s grief also.

Well, this story was quite a welcome surprise after the horrors of the previous story in this collection – The Jesus Stories which I gave I believe, my lowest rating ever. Shocking! Space was a really sad little tale that left me feeling quite choked up and a little despondent, told from a male character’s point of view as he comes to terms with losing his wife. He narrates the story as if he is talking to his wife, Della, which you get the feeling he does quite a lot and gets some comfort from.

The couple have a son, Eric, of indeterminate age (but old enough to have stubble, as the author tells us) and this is where our narrator is struggling the most. Ever since the funeral, he hasn’t been able to communicate with Eric about his mother in the way he would like and often ends up angering him instead. It is not until one night, when they have a power cut and there is nothing left to do but talk, that father and son have an initially wary heart-to-heart that leads to tenuous bridges beginning to be built. Eric confides in his father that he likes to watch television as a bit of a distraction from what he is feeling inside and that it takes very little effort, whilst his father confides in him some things about his mother that he had previously not known.

Kevin Brockmeier’s beautiful way with prose sets an evocative scene of a house without electricity, where the two inhabitants are forced together to share their feelings and become closer as a result. It was painfully sad to read and quite heart-breaking at points, especially when our narrator becomes desperately worried that he will eventually forget things about his wife as time goes on. It’s definitely a return to form after the disaster that I found The Jesus Stories and I’m now eager to read the next story in the collection.

NEXT SHORT STORY: If It Keeps On Raining by Jon McGregor from the collection This Isn’t The Sort Of Thing That Happens To Someone Like You

Welcome to another three months in my Short Stories Challenge! The first few months of this year have whizzed by and I’ve found some great pieces of short fiction to add to my collection. Here’s the stories that will take me right through to the summer:

Elephants In Captivity (Part One) by Rajesh Parameswaran from the collection I Am An Executioner: Love Stories