Apologies for getting this post up a bit late but here’s what happened when my sister Chrissi Reads and I visited YALC for the second year!

YALC is the brain-child of previous Children’s Laureate Malorie Blackman, who was awarded an OBE for her services to children’s literature in 2008 and from the moment appointed has been incredibly passionate about getting young people to read.

The programme for 2015 involved exciting author talks, workshops, book signings, competitions and much, much more. If you’re a big YA fan, this is the one event you don’t want to miss out on. And for bloggers, it’s a brilliant way to meet your favourite authors (and perhaps even other bloggers finally face to face) scour the beautiful books on offer from their Waterstones partner and perhaps even meet one of your all-time favourite idols. Judy Blume and Patrick Ness, I’m talking about you!

This year, YALC was kind enough to add on an extra day and after making sure we definitely had three day tickets we toddled off to Olympia, London where it was being held this year alongside London Film and Comic Con. First of all, thank you so much YALC for the priority queue jumping! Alongside a bunch of Storm Troopers, Walking Dead fans covered in (fake) blood and many, MANY scantily clad women we entered the centre, making a bee-line for the YALC section, of course. We decided we weren’t going to attend any talks that day so enjoyed grabbing our free tote bag and noticing with delight that the Book Wall from last year had indeed returned!

Oh yes. Happy times slouched on the bean bags or deck chairs recovering from all the YALC excitement and meeting up with blogger friends old and new. I think Saturday was probably our best day for talks, the first one we went to was YA: The next generation with Alice Oseman, Lucy Saxon, Helena Coggan and Taran Matharu, chaired by Samantha Shannon. It was a great opportunity to hear about the state of YA fiction right now and be introduced to some promising new talent. Before a spot of lunch we also attended the Being A Girl talk with Hayley Long, C J Daughtery, Holly Smale, Malorie Blackman and Laura Dockrill chaired by Anna James. The talk centred around strong female characters in YA (hooray!) and there’s nothing better than a bit of feminist girl power to get you in the mood for a bit more book hunting in the fabulous Waterstones book area.

Carrie Hope Fletcher did a brilliant job of hosting the next talk: Carrie Hope Fletcher’s YALC book club with Malorie Blackman, Holly Smale and Samantha Shannon. The authors all talked about how they approach writing individually and some of their tips and advice for wanna-be authors was truly inspirational. Then came the talk I was looking forward to the most: Judy Blume and Patrick Ness in conversation!! Excuse me while I fan myself. 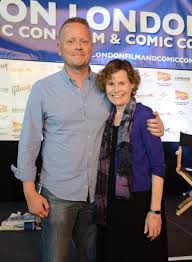 Patrick was a fantastic interviewer and asked the questions everyone wanted to know. I was a huge Judy Blume fan when I was growing up and I came away feeling like I knew Judy Blume personally – she is such a sweetheart and really funny to boot. Patrick Ness is one of my most recent favourite authors and I was absolutely determined I was going to meet him and get my treasured copy of A Monster Calls signed.

Yes, it was time to join some signing queues. After a pitiful performance last year with NO books signed this year I swore was going to be different and spying a beautiful graphic novel of Noughts and Crosses by Malorie Blackman I snapped it up and joined her queue. She was just as nice and down to earth as I had imagined her to be and although I was terribly starstruck I managed to string a couple of sentences together at least! I also managed to pin down the lovely Alexia Casale and she kindly signed my copy of House Of Windows, her second novel which I was very excited to read. After waiting for a little while, it was finally time to meet Queen Judy Blume to get my copy of her new novel, In the Unlikely Event signed. She was also really sweet and friendly even if I did make a bit of a fool of myself by dipping her a little curtsey as I approached the signing desk. (I didn’t mean to – it came out sub-consciously!)

Sunday dawned bright and sunny and we went to two talks, Mental health in YA with Matt Whyman, Brian Conaghan, Annabel Pitcher and Holly Bourne chaired by Imogen Russell Williams. This was a fantastic talk about a very important subject quite close to my heart and although we left the talk a bit overwhelmed, the authors did a great job of bringing mental health to the forefront. The second talk followed the very popular “sexy” panel at YALC 2014 – Bringing sexy back with Non Pratt, Louise O’Neill, Tom Ellen and Lucy Ivison chaired by the wonderful James Dawson. This talk was just as laugh-out-loud funny and brutally honest as last year’s talk as the panel discussed the role of sex in YA novels. Oh my goodness, and James Dawson’s costume? It had to be seen to be believed!

Believe me, the photo does not do it justice.

The other highlight of the day was finally managing to meet Patrick Ness and get my book signed. I even had to miss his talk, Sir Terry and me just to make sure I was in the signing queue. He was lovely and I know he spoke to me and I answered but for the life of me I couldn’t tell you what he said, I was in my own excited little world.

So, that’s it! YALC over for another year. We had a brilliant time and it was just as successful if not more so than last year. Thank you to all the organisers and authors for making it an event to remember.

Here is my swag! 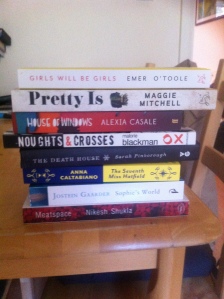 📖 BOOK REVIEW 📖⁣ ⁣ Hello everyone, hope you’ve had a lovely weekend. Today I’m back with a review of The Hunting Party which I’ve been meaning to read for SO long but it wasn’t until @savidgereads picked it for his book club with the lovely Melanie Sykes that I was compelled to pick it up. ⁣ ⁣ I deliberately haven’t watched his video chatting about the book so I couldn’t be subconsciously influenced in my review 😂 so I’ll be off to watch it after this. If you are a bookish person and don’t already follow Simon on his channel, please make the leap and check him out, he’s one of the nicest, down to earth book tubers and his taste in books very much matches my own.⁣ ⁣ But back to The Hunting Party. This book follows a group of friends as they head to a remote lodge in the Highlands to celebrate New Year. Part way through their stay, one of the group is found dead in suspicious circumstances and it becomes a thrilling whodunnit where everyone’s a potential suspect. ⁣ ⁣ Having heard so much about this book, my expectations were quite high and I’m delighted to confirm that I thoroughly enjoyed this story. I’m Scottish myself, so the descriptions of the landscape felt a little bit like home, despite the gruesome premise. ⁣ ⁣ There are quite a lot of characters to get to grips with and it took me a little while to get the relationships between each of the individuals straight but once I did, I was gripped. The beauty of this story, is that we hear from multiple perspectives and every single person could have had a motive for murder.⁣ ⁣ Additionally, the vast majority of these characters were incredibly unlikeable and I have to admit, I love reading about characters that I hate. It just makes my reading experience more memorable overall if a particular personality really gets under my skin.⁣ ⁣ I wasn’t able to completely predict the ending - which I’m relieved about, however it wasn’t the biggest surprise to me as I had my suspicions. Saying that, I was so compelled throughout it didn’t matter too much. Very much looking forward to the author’s next novel, The Guest List on the strength of this.⁣ ⁣ Four stars 🌟 🌟 🌟 🌟