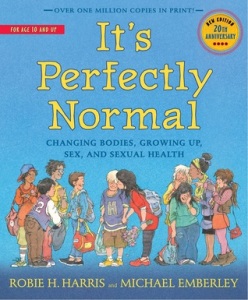 The definitive book about puberty and sexual health for today’s kids and teens, now fully updated for its twentieth anniversary.

For two decades, this universally acclaimed book on sexuality has been the most trusted and accessible resource for kids, parents, teachers, librarians, and anyone else who cares about the well-being of tweens and teens. Now, in honor of its anniversary, It’s Perfectly Normal has been updated with information on subjects such as safe and savvy Internet use, gender identity, emergency contraception, and more. Providing accurate and up-to-date answers to nearly every imaginable question, from conception and puberty to birth control and STDs, It’s Perfectly Normal offers young people the information they need—now more than ever—to make responsible decisions and stay healthy.

Welcome to our second banned book of 2016! As always, we’ll be looking at why the book was challenged, how/if things have changed since the book was originally published and our own opinions on the book. Here’s what we’ll be reading for the rest of 2016…

In the Top Ten most frequently challenged books in 2014 (source)

BETH: No, not really. Even though the book was published just over twenty years ago I still count it as a fairly recently published book. The nineties was still a somewhat “enlightened age,” if that makes sense and I don’t think anything about this book is so shocking that it should be challenged/banned. Also, can I just say – one of the reasons for being challenged is “sex education,” why on earth should that be a reason to challenge a book? Surely sex education is a good thing? In my opinion it is anyway. Some of the cartoons in the book are perhaps a little surprising as they are quite graphic (and I have to admit to having a little childish chuckle over some of them) but everything is very honestly presented, no holds barred, useful and factual information.

CHRISSI: Not at all. I think it is a decent book to teach preteens about important information that they need to know. Yes, it could be… er… interesting in the classroom, but what’s not to say that a book like this can’t be available in the library? In my opinion it certainly should be available. I understand that some of the cartoons are rather graphic, but not overly so and I wouldn’t call it ‘child pornography’. No, just no!

BETH: *sighs* Especially not now! With the wealth of sexual information out there for teenagers who are considering having sex, I would rather that they are well informed of the risks they are taking rather than being mis-informed or knowing very little and ending up in a situation where they are suddenly forced to confront a potential child, a STD or worse. I remember my sex education at school which unfortunately wasn’t great – they just showed us an excruciatingly embarrassing video and BOOM that was it, we were expected to be experts. On the lighter side, I do remember Chrissi coming home from school and telling us very excitedly that she learnt all about “pyramids” at school that day. You know, the ones you have once a month?! I can remember so clearly our parents being in absolute hysterics.

CHRISSI: Ha, ha, ha! Sorry, just reading my innocent comment from my childhood. I can’t say that I really remember the sex education that I received at school, but I do recall a video and it was awkward. I think it needs to be less awkward in schools so that preteens and teenagers are ready and educated about important information. A book like this is just a starting point.

What did you think of this book?

BETH: I thought it was pretty great. We need more books like this to teach teenagers the right information about sex so they can make the most appropriate and hopefully best choices for themselves at that time. I really think this book will give them the answers they need and help deal with the difficult times that are practically guaranteed with puberty and adolescence.

CHRISSI:  It made me chuckle. Some of it would go over children’s heads, especially the very science-y parts, however I think it’s important and informative and it should definitely be a book that young teenagers should be reading. It gives answers to the questions that they may be unsure about and delivers it in a real and honest manner. I certainly don’t think it should be banned!

Would you recommend it?

Beth’s personal star rating (out of 5):

Join us again on the last Monday of March when we will be discussing Saga Volume 1 by Brian Vaughan and Fiona Staples.

Happy New Year everyone! Banned Books is another challenge I love to do with my sister and fellow blogger Chrissi Reads. We’ve now chosen our titles for 2016 which are quite a mixture and include a couple of graphic novels – quite a new venture for us but one that are looking forward to discovering!

As always, we’ll be putting out our post on the last Monday of every month so if you fancy reading along with us, please feel free!