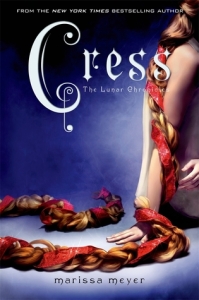 In this third book in Marissa Meyer’s bestselling Lunar Chronicles series, Cinder and Captain Thorne are fugitives on the run, now with Scarlet and Wolf in tow. Together, they’re plotting to overthrow Queen Levana and prevent her army from invading Earth.

Their best hope lies with Cress, a girl trapped on a satellite since childhood who’s only ever had her netscreens as company. All that screen time has made Cress an excellent hacker. Unfortunately, she’s being forced to work for Queen Levana, and she’s just received orders to track down Cinder and her handsome accomplice.

When a daring rescue of Cress goes awry, the group is splintered. Cress finally has her freedom, but it comes at a higher price than she’d ever expected. Meanwhile, Queen Levana will let nothing prevent her marriage to Emperor Kai, especially the cyborg mechanic. Cress, Scarlet, and Cinder may not have signed up to save the world, but they may be the only hope the world has.

Isn’t it strange how your opinion on a series can change so much from the first book? Mine certainly has. Not saying I didn’t enjoy Cinder, the first book in the Lunar Chronicles but it wasn’t a series I saw myself continuing. If it wasn’t for my sister and fellow blogger Chrissi Reads assuring me how great the second book, Scarlet was, I probably wouldn’t have carried on! I’m ever so glad I did, because the world that Marissa Meyer has created is truly magical and each book in the series just keeps getting better and better.

Each book is loosely based on a fairy tale (and has the most fabulous covers known to man). So, with the first book it was Cinderella quite obviously, the second Little Red Riding Hood and in this third offering, Cress could otherwise be known as Rapunzel. She is an employee of Queen Levana, villain extraordinaire and a talented hacker for Luna. Levana has kept her isolated on a satellite for her entire life with her only point of human contact being Sybil, Levana’s head thaumaturge/flunkey. As a result, Cress is incredibly naive, quite socially awkward and desperately in need of friends and her freedom.

See where I’m going with this? Cinder, Captain Thorne, Scarlet, Wolf and Iko are all rattling around in a spaceship on the run from the evil Queen Levana and her dastardly plans (which I’m not saying anything about for fear of spoiling the series for anyone who hasn’t started it yet!). They immediately mount a mission to rescue Cress from her lonely, humdrum existence, guessing that her talents with I.T. could make her quite valuable to them in the future… Of course, this wouldn’t be an adventure if things didn’t go slightly haywire along the way and they do, for a number of our characters which could affect the whole game plan of overthrowing Queen Levana, preventing her hideous marriage to the wonderful Prince Kai and clearing the way for the rightful ruler of Luna to take the throne.

This book is quite a hefty, meaty read at nearly 600 pages but please don’t let the size put you off, it was so action-packed that I seemed to read it in no time at all. I’m loving the mixture of characters that the author is producing, they’re all so endearing in their own ways and I’m beginning to appreciate each one for what they bring to the narrative: Cinder and her burgeoning leadership skills, Thorne with his wicked sense of humour, Scarlet for her fiesty attitude and Cress for her sweet innocence. Then BAM! right at the end, we get introduced to a new character that will play a prominent role in the next novel – Princess Winter who appears to be all kinds of crazy but utterly bewitching. I literally cannot wait to see how this series is going to pan out. 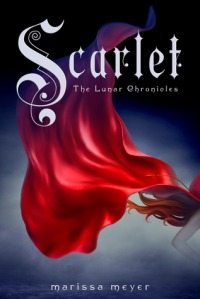 Cinder, the cyborg mechanic, returns in the second thrilling installment of the bestselling Lunar Chronicles. She’s trying to break out of prison–even though if she succeeds, she’ll be the Commonwealth’s most wanted fugitive. Halfway around the world, Scarlet Benoit’s grandmother is missing. It turns out there are many things Scarlet doesn’t know about her grandmother or the grave danger she has lived in her whole life. When Scarlet encounters Wolf, a street fighter who may have information as to her grandmother’s whereabouts, she is loath to trust this stranger, but is inexplicably drawn to him, and he to her. As Scarlet and Wolf unravel one mystery, they encounter another when they meet Cinder. Now, all of them must stay one step ahead of the vicious Lunar Queen Levana, who will do anything for the handsome Prince Kai to become her husband, her king, her prisoner.

This is the second novel in Marissa Meyer’s Lunar Chronicles, which I was very excited to get to as my sister and fellow blogger Chrissi Reads has been quite enthusiastic in her praise for it. And yes in my opinion it’s even better than the first, Cinder, with another kick-ass heroine to get excited about. And this is a feisty, fierce and incredibly likeable character called Scarlet who has swapped her little red cape for a little red hoodie and her wicker basket for a handgun – just for protection, and only to be used in dire circumstances, you understand! When we first meet Scarlet, she is devastated as her beloved grandmother who has raised her from a child has gone missing, later we find out she was abducted so Scarlet immediately goes on a mission to find her, damning any consequences. On her journey, Scarlet meets the enigmatic Wolf, a lone fighter who makes money at brawls which he rarely loses, but his back story will prove vitally important for Scarlet so he may be a handy man to have around.

Meanwhile, our heroine from the previous novel, the cyborg mechanic Cinder is languishing in prison. Not for long. With (not much help really) from fellow convict and first-class flirt Captain Thorne, Cinder manages to escape from prison and the two hop aboard Thorne’s ship and now must fight to escape detection from the authorities as a certain someone, Queen Levana, our villain of the piece is not a happy bunny and is looking for Cinder’s head on a plate. Cinder’s history is also a little complicated, and it turns out she’s actually someone quite important, the fact of which could also see her dead, if uncovered by the wrong people. Fortunately, she has lots of lovely new Lunar powers to keep her occupied before Scarlet and Cinder meet for the first time and the connection between them is fully explored. Meanwhile poor Prince Kai, the ruler of New Beijing, has a terrible decision to make. Will he think of himself or of his people?

Comparing both novels in The Lunar Chronicles so far, Scarlet has the edge for me. Not that I didn’t enjoy Cinder, as I have most fond memories of it and would probably re-read it, but I just loved Scarlet as a character. Marissa Meyer has written such a spirited, independent and strong female that also has a soft and vulnerable side, so that she does not come across as too hard. This came across very vividly in the way she cares about her family, her relationship with Wolf, and what she is prepared to sacrifice for someone she loves. It’s great to see the return of old characters like Cinder, Prince Kai and even baddie Queen Levana, who were welcomed into my imagination like old friends/enemies you love to hate. As a bit of a fairy-tale junkie, I have a bit of an obsession for fairy-tale re-tellings at the moment, and the author does a mighty fine job of digging up those classic childhood stories and blending them with a mixture of science fiction and adventure. It seems to be the perfect recipe for success at the moment in my opinion. If you don’t believe me, just ask her legion of fans. 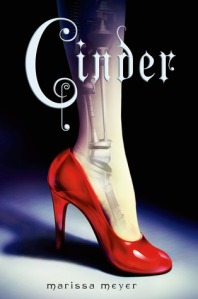 Humans and androids crowd the raucous streets of New Beijing. A deadly plague ravages the population. From space, a ruthless lunar people watch, waiting to make their move. No one knows that Earth’s fate hinges on one girl.

Cinder, a gifted mechanic, is a cyborg. She’s a second-class citizen with a mysterious past, reviled by her stepmother and blamed for her stepsister’s illness. But when her life becomes intertwined with the handsome Prince Kai’s, she suddenly finds herself at the center of an intergalactic struggle, and a forbidden attraction. Caught between duty and freedom, loyalty and betrayal, she must uncover secrets about her past in order to protect her world’s future.

Time for some more of my guilty pleasure – YA fiction! This book came along with a recommendation by my sister @ChrissiReads although her favourite of the two is the second in the series, Scarlet. This fascinating debut novel by Marissa Meyer is set in a future, dystopian world where humans co-exist with androids (which seems a very handy thing to have as a friend or personal assistant) and cyborgs. Loosely based on the fairy tale Cinderella (clue’s in the title!) our heroine Cinder works as a mechanic in New Beijing, managing a small stall where her customers bring her their mechanical equipment failures. Her home life however is not so successful, as she undergoes daily battles with her wicked guardian/stepmother, and is forced into completing chores and earning the funds to keep this womans bills paid, fund her luxury household technical items and keep her stepsisters in beautiful ballgowns.

It is a fairly miserable existence for poor Cinder until a chance encounter with Prince Kai, the heir to the throne who brings in his battered but beloved old android, in the hope that she may be able to fix it. One other important thing to note about this book is that Earth is in the middle of a fight against a serious and deadly plague-like illness which is claiming too many lives without hope of an imminent cure. Currently, Prince Kai’s father has succumbed to the disease and the young heir must deal with the loss of his father along with a threat of war from the Queen of the other-worldly,vicious and very “persuasive” Lunar peoples. As Cinder is hurled into this messy business, she uncovers secrets she could never have imagined, and discovers more about herself than she could have ever believed.

For a debut, I thought this was an incredibly accomplished piece of YA fiction. I loved the science-fiction elements and the imaginative ideas twisting around this new digital world, where communications are transferred at the speed of lightning, individuals are identified by an ID chip in the wrist and alien races have the power to control our minds. Although Cinder was the only character that was explored in any real depth, I enjoyed the role that others played although my favourite had to be the intimidating and demanding Queen Levana of the Lunar People, whose dominating presence and magical trickery made the story a joy to read. It is also refreshing to read a re-telling of the classic Cinderella story where nothing is ever black and white, and there are surprises and twists around every corner. Why is there so little information about Cinder’s early life? How did she become a cyborg? Bring on Scarlet, I say!