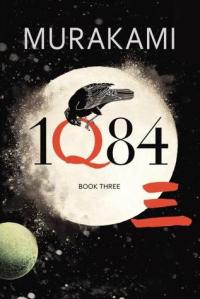 Book Two of 1Q84 ended with Aomame standing on the Metropolitan Expressway with a gun between her lips.

She knows she is being hunted, and that she has put herself in terrible danger in order to save the man she loves.

But things are moving forward, and Aomame does not yet know that she and Tengo are more closely bound than ever.

Tengo is searching for Aomame, and he must find her before this world’s rules loosen up too much.

He must find her before someone else does.

For my review of the first two books in the series, please click HERE.

Ah, Haruki Murakami – how I do love thee! This is the third (and final?) book in the 1Q84 trilogy by the Japanese author and it’s had a mixed bag of reviews, especially on GoodReads. As a devoted Murakami fan, my thoughts fall on the more positive, gushing variety but I have to admit, I could understand some of the comments made against it. If you’re new to Murakami, this probably isn’t the best book to begin with, I’d probably suggest Norwegian Wood or The Wind Up Bird Chronicle as he does have a bit of a tendency to be slightly “out there,” and perhaps it might be difficult to see his appeal.

For someone who totally gets him, the world of 1Q84 is magical, beautiful, occasionally dark and disturbing and intensely dream-like. Personally, I didn’t feel that the third book lived up to the brilliance of the first two but it was still a solid end to a wonderful creation that I honestly didn’t want to leave. The two main characters, Tengo and Aomame first met each other in childhood but when Aomame enters a strange new world where there are two moons, little people, and a crazy cult they begin to form a connection with each other again. Before long, it is obvious that the two are meant to be together but in this new, dangerous world coming together may also be their undoing.

We leave Aomame at the end of the second book in a rather precarious position with certainly more questions and wonderment for the reader than answers. However, if you’re about to read 1Q84 Book Three hoping for answers to all the mysteries, you’ll be sorely disappointed. Part of the Murakami style is to leave the reader hanging just a little bit, leaving us to make our own conclusions about what has been going on. Yes, this can be slightly frustrating at points and some people may hate it purely because of this but personally, I find it quite refreshing and enjoy making my own mind up about things rather than having things wrapped up for me in a perfect little package.

Every time I read Murakami, I become entranced by the world he leads us in to. It’s true, the action can be a bit muted at times, and at points not much really goes on. He has a gift however for pulling you into the heads of very intriguing characters so that you feel you know them inside out whilst at the same time, not really at all. It’s like being in a giant soap bubble that you don’t ever want to pop and with Murakami, I never want to return to reality.

I saw this book making the rounds a while ago but I deliberately didn’t want to know anything about it for fear of spoilers. When the opportunity came up to include it in the #newyearoldreads challenge (started by @emmasbookishcorner ) and buddy read it with @keeperofpages it was a win-win situation! 😱The Rumour is a debut novel and a cracking one at that. It kept me on my toes and constantly intrigued to continue turning the pages. 😱Janel and I tried to stay one step ahead and figure out what might be going on but we failed dismally and were delighted to do so. It’s always a good sign when the author can surprise the reader like she did. It’s also one of the qualities I look for most in my crime fiction or thrillers. 😱 Lesley Kara writes about small town issues and the characters that inhabit a small town so well. It felt authentic, claustrophobic and incredibly considered writing. 😱 I would certainly recommend The Rumour for fans of the genre and those who enjoy a gripping, head-scratching plot! #bookstagram #bookworm #readingwithmybestie #buddyreads #therumour #lesleykara #debutnovel #wortharead