People used to call them ‘friends’ and said how they were good for your brain. And then a day came when all that changed . . . when they became our enemy.

Now, anyone found harbouring a rogue imaginary person is in for the Cosh, an operation that fries your imagination and zaps whatever’s in there, out of existence.

That’s why I wish Klaris Cliff had never shown up. And why I know that proving her innocence is the last hope I have of saving myself.

I was lucky enough to both receive an ARC of this exciting debut novel from Oxford University Press and to attend a bloggers evening where I got to hear the author read from her novel and speak about her writing experience. More on that later including a guilty admission of my own…

Among a host of intriguing characters (real and imaginary) is our main character Joseph whose father is raising him on his own after his mother disappeared two years previously then sent a postcard from Spain telling him in the vaguest of ways that she would be back “in the summer.” Joseph still has faith that his mother will return, after all she didn’t specify WHICH summer she would be back but his father has begun to date again, which Joseph squirms away from with the usual teenage distaste! This is no ordinary single-parent, teenage angst story however. It is a story where the imaginary friends of our childhood really do exist and they can go rogue i.e. jump into another person’s mind, feed dogs alcohol, damage cars, break essential medical devices – you know, the usual madness and mayhem. This is why anybody harbouring one is immediately taken for a procedure known as the “Cosh,” in which they eliminate the imaginative part of the brain for good. Yup, that’s right. No more imagination, no more make-believe, surely a nightmare for any child? (apart from the obvious danger of brain zapping of course).

The problem is that our hero Joseph’s brain is now riddled with an imaginary friend who has hopped over from his neighbours child Flea, and her name is Klaris Cliff. She is being accused of carrying out a variety of mischief, and Joseph is in real danger of losing the part of his brain that can still imagine his mum returning home to him. Teaming up with Flea, he knows that Klaris is innocent, and makes it his mission to find out who is framing Klaris and why before it is too late.

Although this novel is probably aimed at an age range a wee bit lower than myself, I’m really glad I got the opportunity to read this quirky and highly original piece of writing. It has a range of characters to fall in love with – this even takes into consideration the slightly creepy twins Egg and Willis, and has a fast-paced, dramatic and slightly bitter-sweet ending that I think children will really enjoy. The idea of the “Cosh” procedure to remove an imaginary friend was absolutely terrifying and ingenious, and made me question whether the author was from a scientific background, as in my field we have COSHH which stands for Control of Substances Hazardous to Health! Then I found out that she is the youngest daughter of a rocket scientist, so I’m wondering now if this is where she got her inspiration from? 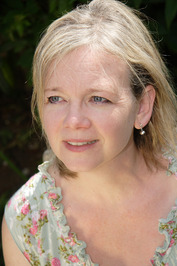 I really enjoyed listening to Nikki speak at the Oxford University Press bloggers night, especially as she told us of her own experiences with a recurring imaginary friend who bore an uncanny similarity to one experienced by her older brother, and decades later, her own daughter.

Then we were asked if any of us had any imaginary friends when we were younger. Yep, that was me in the second row, admitting to having a lion who lived behind the sofa that we had to feed on a regular basis. The shame! This is why I should never be allowed out in public. Anyway, read Nikki’s amazing debut novel Who Framed Klaris Cliff? For yourself, for your kids, for your inner kid, just read it.

With many thanks to Oxford University Press for their hospitality and a great evening. I’ll leave the final words to Nikki.

“In this book I also wanted to give a shout out to imagination, that weird substance as malleable as clay that seems to dry out as we grow up, and which we forget can be so powerful. You can make anything with it, castles in the sky, ponies, Christmas day and yes, even friends, which, if you’re anything like me, you will carry with you throughout your life. Keep dreaming,               Nikki Sheehan.

Hello everyone, I’m back from a fantastic holiday in Iceland for another WWW Wednesday! Thanks as ever to MizB over at Should Be Reading for hosting.

I’m attending a bloggers evening hosted by Oxford University Press this Friday and this is one of the books I have to read beforehand. Looking forward to hearing the author speak at this event.

Aesop’s Fables is the January read for the Kid-Lit feature I participate in with my sister and fellow blogger, Chrissi Reads. Look out for our reviews coming soon!

This is the second book from Oxford University Press that I’m reading for the bloggers evening this Friday. Can’t wait!

What are you reading this Wednesday? Please leave your link and I’ll come and pay you a visit, happy reading everyone!