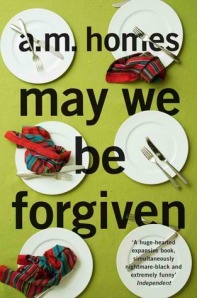 Harold Silver has spent a lifetime watching his younger brother, George, a taller, smarter, and more successful high-flying TV executive acquire a covetable wife, two kids, and a beautiful home in the suburbs of New York City. But Harry, a historian and Nixon scholar, also knows George has a murderous temper, and when George loses control the result is an act of violence so shocking that both brothers are hurled into entirely new lives in which they both must seek absolution.

Harry finds himself suddenly playing parent to his brother’s two adolescent children, tumbling down the rabbit hole of Internet sex, dealing with ageing parents who move through time like travellers on a fantastic voyage. As Harry builds a twenty-first-century family created by choice rather than biology, we become all the more aware of the ways in which our history, both personal and political, can become our destiny and either compel us to repeat our errors or be the catalyst for change.

May We Be Forgiven is an unnerving, funny tale of unexpected intimacies and of how one deeply fractured family might begin to put itself back together.

This novel won the Women’s Prize for Fiction in 2013, now termed Baileys Women’s Prize for Fiction and previously was known as the Orange Prize for Fiction, launched back in 1996 and celebrates excellence, originality and accessibility in women’s writing worldwide. First of all, I can’t believe I am only getting to this book now, I absolutely loved it and am now on a mission to read A.M. Homes entire back catalogue of work. I normally know if I am going to like a novel fairly early in and in this case, I knew by page 12 that I was going to love it, a fact that both surprised and delighted me.

Our protagonist is a middle-aged man called Harold Silver whom throughout his life always felt like he was playing second fiddle to his brother George who had been incredibly lucky in comparison, enjoying a well-paid job, a gorgeous wife, two children and an enviable home. Harry on the other hand seemed to barely scrape by in life by teaching a few classes on his favourite subject – the former President of the United States, Richard Nixon, of whom he is also attempting to write a book upon. Things take a dramatic turn for Harry quite early on however as a stolen, adulterated kiss is procured one Thanksgiving from his brother’s wife Jane. This one event and mistake on the part of Harry leads to both tragic and unprecedented consequences for both brothers, changing their lives dramatically and giving both something to atone for. Harry’s relationship (which wasn’t that stable to begin with) crumbles and he is left literally “holding the babies,” as the sole carer of his brother’s teenage children.

The journey Harry goes through is nothing short of remarkable and I loved how the author used a perfect blend of dark humour and sentiment to make the reader fall in love with a character that could previously have been described as un-likeable and a waste of time. Harry makes a momentous effort to make up for his past behaviours yet I think the author is very clever at reminding us that in the end he is a human being like everyone else and deserves the right to make mistakes and to learn from them. I couldn’t help but think of him as a modern hero in winning over his brother’s children and raising them as if they were his own, with clear moral and ethical values. Some of the things that Harry got up to in his private life were rather bizarre although very humourous, but again re-iterated how authentic Harry was as a character, flaws and all.

As this is my first book from A.M. Homes I’m not too certain how it compares to her other works but I found this a beautiful and quite moving account of a man striving to become a better person and piecing a fragmented family back together. The writing style is compelling, the idea and execution was ingenious and the characters so well drawn that I felt that I was reading about an old, beloved friend. I certainly didn’t want the book to end and when it did, was more than a little disappointed that I wouldn’t get to read more about Harry! A fantastic and amusing read, and a well worthy winner of the Women’s Prize for Fiction.

Welcome to another WWW Wednesday, and thanks as ever to MizB for hosting.

This book won the Women’s Prize for fiction last year here in the UK and I can’t believe I’m only getting round to it now. Loving it so far!

This book was part of a challenge I participate in with my sister and fellow blogger Chrissi Reads and was our Kid-Lit choice for the month of May. Look out for our reviews coming your way on Sunday! 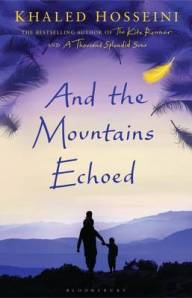 Next up is a book I’ve actually had on my TBR pile for ages but am now going to review with Chrissi Reads. It’s also part of the Richard and Judy Summer Book Club here in the UK. I can’t wait to start this one!

What are you reading this Wednesday? Please leave your link and I’ll come pay you a visit! Happy Reading Everyone!

The Women’s Prize for Fiction 2013 shortlist was announced today (formerly the Orange Prize), looks like a tough group – do you think Hilary Mantel can take them? And win yet another literary prize (and £30,000) for Bring Up The Bodies? Place your bets! The Chair of Judges, Miranda Richardson said “The shortlist for 2013 represents six tremendous writers at the top of their game.”

I can’t wait to read them. I’ve only read On Beauty by Zadie Smith and wasn’t that impressed but it was a long time ago and here’s hoping my tastes have matured. The A.M. Homes book is on the Waterstones Book Club list at the moment and definitely on my TBR radar, and I have been meaning to read Kate Atkinson for a while, but not sure whether I should start with her older works? I have read The Poisonwood Bible by Barbara Kingsolver and have The Lacuna to read pretty soon so looking forward to dipping into Flight Behaviour. As for the giantess that is Hilary Mantel, I will soon be attempting to read Wolf Hall again, was I the only person in the world that didn’t get it? I am a big fan of the Tudor period so am very disappointed in myself…. (slaps wrist). Finally, Where’d You Go Bernadette by Maria Semple  was also mentioned and recommended in a podcast that I listen to on a regular basis – Books on the Nightstand, so will be checking that out.

Please feel free to share your thoughts and comments on the shortlist!