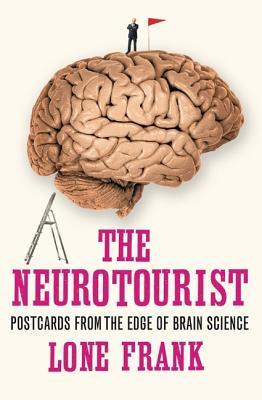 Discover the true heart of humanity: the brain. Your brain shapes your world, but you can also shape your brain. From the God helmet to the No Lie MRI, award-winning journalist Lone Frank embarks on an incredible adventure to the frontiers of neuroscience, revealing how today’s top scientists are reinventing human nature, morality, happiness, health, and reality itself. Interlacing bizarre experiments, cutting-edge research, and irreverent interviews, The Neurotourist is an unforgettable tour of the mind-bending revolution underway in the new age of the brain. A critically-acclaimed journalist, science writer, and TV presenter, Lone Frank also holds a PhD in neurobiology and has worked as a research scientist in Denmark and the US. Apart from a particularly ‘cute’ corpus callosum she has an expert’s word that her brain is quite unremarkable.

I was quite excited when I saw this title at my local library as my favourite non-fiction books are usually science-based and I’m fascinated with the whole area of neuroscience which is constantly changing as we learn more about the mysterious goings-on of our brains. Looking at the contents page also provides some scope for excitement with intriguing titles such as “Finding God in the synapses: your own personal Jesus,” “Happiness is a cognitive workout,” and “Lies, damn lies – the prints are all over your cortex.” So, interesting content and a science writer with a sense of humour… sounds like my perfect book but in reality I’m afraid it fell slightly flat.

This is not to say that this is a bad read because it definitely isn’t and I guess it just depends what you’re looking for from the book. It’s chock-a-block with interesting facts and figures and I enjoyed reading about the number of studies that have been carried out in the name of neuroscience, bad or good depending on the answers it gave the researchers and in many cases, from the author’s personal (and often strong) opinion! One particularly mind-boggling and often controversial example is the area of religion when associated with the brain.

Basically, from a very young age, our surroundings and parental beliefs have a direct impact on what is hard-wired into the brain in much the same way that we learn the complexities of language. Having a large amount of serotonin (that happy hormone) in our brains affects the extent to which a person is spiritual and researchers have shown that actual spiritual experiences can be induced by increasing the brain’s natural supply of our own personal opiate system. One of my favourite experimental examples related to this is “The God Helmet.” This was a piece of apparatus developed by scientists Koren and Persinger to study events occurring when the temporal lobe of the brain was stimulated. Our author was the perfect test subject as she noted the feeling of a “presence,” when wearing the helmet. Persinger has confirmed that for several subjects “mystical experiences and altered states,” were reported but what does this mean for religion? Is it just because our temporal lobe has been stimulated that we are aware of the presence of God? Other scientists seem to think so and have quite a lot to say about religion: Boyer called it “a parasite on our cognitive apparatus,” and more recently the loud and proud atheist Richard Dawkins said it was “comparable to the smallpox virus but harder to eradicate.” Yikes, I may not be a religious person but harsh words, Mr Dawkins!

I think the above chapter on religion was probably my favourite point of the entire book as other chapters focused on economics, ethics and marketing which although easy to read became slightly dull and are not really my cup of tea. Perhaps I was expecting too much from this book as unfortunately I didn’t really find out anything I didn’t know already. Although some parts were humorous I did also feel that the author tended to get on her soap box and was rather close-minded when discussing a personal opinion of her own that she was convinced was correct/the only possible explanation. Saying that, her passion for the subject area cannot be faulted and may be a writing style that can be appreciated by a different reader.