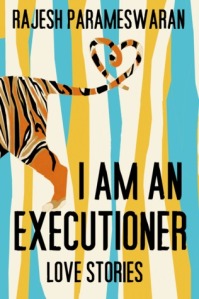 What’s Four Rajeshes all about?:

An explosive, funny, wildly original fiction debut: nine stories about the power of love and the love of power, two urgent human desires that inevitably, and sometimes calamitously, intertwine.In I Am an Executioner, Rajesh Parameswaran introduces us to a cast of heroes—and antiheroes—who spring from his riotous, singular imagination. Four Rajeshes tells the story of a railroad manager who appears to get more than he bargained for when he employs a young man called R. to be his secretary.

I was slightly apprehensive before beginning the third story in this excellent debut collection, purely because I gave five stars to both the previous stories so went into this one with slightly raised expectations. The tale begins where an unnamed person is looking at a photograph of a man he believes to be his ancestor, one P. Rajarajeshwaran Iyer who was the manager of a railway station in the small Indian dwelling of Rombachinnapattinam, which happened to be his own ancestral village. The man in question is actually our narrator for the story and we learn about certain events that unfolded when on the spur of the moment, he employed a poor young man known only as R. to be his secretary when he approaches him and begs for work. Our narrator is quite a complex character – he is immensely proud of his status as manager of the railway and has recently become engaged to his supervisors niece, the thought of which is making him incredibly anxious. You see our narrator has leanings towards the same sex, and often uses one of his employees – a young man called Dhananjayan for affection and release.

Things become slightly more confusing for our narrator when he dictates his first letter to his new employee, R. On examining the letter afterwards, he sees that the boy has a beautiful hand yet halfway through the letter it resembles nothing but an indecipherable scrawl with strange illegible symbols throughout. When he questions R. the boy seems quite confused and his only excuse is that he may have become distracted. When this happens a second time, our narrator becomes worried but does not want to lose a diligent employee and excuses him from dictation duties. Then our narrator has to leave the station one day in the hands of Dhana and R. during the preparations for his upcoming nuptials. On returning, future family in tow, the station is in chaos. A train has not departed on time, a crowd has gathered and Dhana is in tears, blaming R. for the upheaval. When our narrator gets past the amused, staring crowd, he sees R. who has been scrawling all over the walls in chalk, the same strange symbols and writings that no-one is able to understand. Apoplectic with rage, our narrator strikes the boy and orders him out of his sight. But then R. goes missing and our narrator becomes frantic to find him, especially after seeing a story in a newspaper that couldn’t possibly be about R. could it?

I’m sorry to say I didn’t enjoy this story as much as I did the previous two in the collection, but as I said earlier I did have very high expectations. The author clearly has a gift and a knack for story-telling, and I was intrigued throughout about the character of R. while trying to figure out what exactly was going on. I love the traditional Indian and cultural influences that resonate clearly throughout the story which made what I was reading feel so authentic – I could almost see, hear and smell everything that was written. As a short piece of fiction it is one of the highest quality and although I was intensely frustrated by the ending it was all for the greater good, as I find myself going over it again and again in my mind. Bring on the next one!

NEXT SHORT STORY: Apples by Kevin Brockmeier from the collection Things That Fall From The Sky

The year is going really quickly so far and these are the short stories that will keep me entertained until the end of June!

Jamila by Randy Taguchi from the collection Fujisan

The Seagull Army Descends on Strong Beach, 1979 by Karen Russell from the collection Vampires in the Lemon Grove

Bees by Sarah Hall from the collection The Beautiful Indifference

Four Rajeshes by Rajesh Parameswaran from the collection I Am An Executioner: Love Stories

Ganymede by Daphne du Maurier from the collection The Breaking Point

Chocolate Hearts From The New World by Michel Faber from the collection The Apple: New Crimson Petal Stories

Malvern Hills by Kazuo Ishiguro from the collection Nocturnes: Five Stories of Music and Nightfall