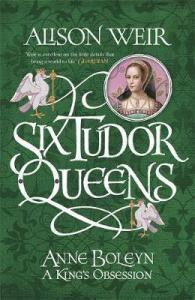 Anne Boleyn: A King’s Obsession by bestselling historian Alison Weir, author of Katherine of Aragon: The True Queen, is the second captivating novel in the Six Tudor Queens series. An unforgettable portrait of the ambitious woman whose fate we know all too well, but whose true motivations may surprise you. Essential reading for fans of Philippa Gregory and Elizabeth Chadwick.

The young woman who changed the course of history.

Fresh from the palaces of Burgundy and France, Anne draws attention at the English court, embracing the play of courtly love.

But when the King commands, nothing is ever a game.

Anne has a spirit worthy of a crown – and the crown is what she seeks. At any price.

ANNE BOLEYN. The second of Henry’s Queens. Her story.
History tells us why she died. This powerful novel shows her as she lived.

Alison Weir has been for the longest time now in my eyes, the queen of historical non-fiction and I was delighted when she began writing historical fiction especially as her new project is focused on one of my favourite time periods in history – the Tudor period in England. This will take the form of six novels over six years, one for each wife of the inimitable Henry VIII. The first book, Katherine Of Aragon: The True Queen came out last year and was utterly brilliant so I was incredibly excited to be approved by NetGalley to read the second novel, Anne Boleyn: A King’s Obsession when it was published in May of this year. Thank you so much to them and the publishers, Headline for this opportunity and for a copy of the novel in return for an honest review.

Anne Boleyn: A King’s Obsession was everything I was hoping it would be coupled with being a huge surprise and delight to read. Drawing on new research available, the author shows us a different side to Anne, certainly a shocking turnabout from how she is often portrayed in history. It’s true that Anne Boleyn doesn’t have the best reputation in the world. She embarked on an affair with Henry VIII while he was still married to Katherine Of Aragon, an affair that continued for many, many years and led to a number of upsets and permanent changes in England as a result of their relationship, particularly in Henry’s break with the Roman Catholic church. Henry was finally set free of the shackles of his marriage to Katherine, which he had become convinced was an abomination in the eyes of God as she had been originally his deceased brother Arthur’s wife. These shackles were not removed willingly however by Katherine, she was determined until her last breath that she was the true Queen of England and their marriage was right and lawful and it was only her death that allowed Henry and Anne to become (legally) husband and wife.

It is not too long however before Henry once again begins to question the validity of his marriage with Anne. She has given him one child, Elizabeth but no male heirs that he was so desperate for and certain that Anne would provide. Then the rumours start to circulate. From musicians in Anne’s chamber, to old flames and even her own brother, Henry is persuaded into believing that the innocent girl he met and fell in love with may not be so innocent as he thought.

I’m presuming we all know how the story ends? I have to say, even though I knew exactly what was going to happen, I still felt an odd sort of hope of a reprieve for Anne at the very end. It’s quite silly really, especially when I have read a couple of different accounts (fiction and non-fiction) of the events and it ends the way it truthfully did all those years ago. However, I became so attached to Anne as a character that it was hard to let her go at the end. She was a flawed, stubborn and sometimes quite precious person but I admired her ambition and determination and the way she took quite a feminist stance on a few issues, entirely alien at that time of history, something I had no idea about and found a very welcome addition to the story. Let’s just talk about her opinions and feelings towards Henry as well? Let me just say I did not see that coming! In other accounts I have read, Henry and Anne are both deeply in love with each other. So, to have it suggested that this may not necessarily have been the case was fascinating and very exciting to read as a result. Alison Weir exhibits a true mastery in re-telling the stories of the Tudor reign and her Six Tudor Queens series is really exceeding all my expectations. Do I really have to wait a whole year before reading about the next wife, Jane Seymour?