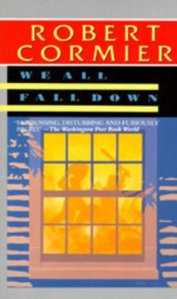 They entered the house at 9:02 P.M. and trashed their way through the Cape Cod cottage. At 9:46 P.M. Karen Jerome made the mistake of arriving home early. Thrown down the basement stairs, Karen slips into a coma. The trashers slip away.
But The Avenger has seen it all.

Welcome to the fourth banned book in our series for 2019! As always, we’ll be looking at why the book was challenged, how/if things have changed since the book was originally published and our own opinions on the book. Here’s what we’ll be reading for the rest of the year:

JUNE: Arming America: The Origins of a National Gun Culture– Michael A. Bellesiles

We All Fall Down by Robert Cormier

In the Top Ten most frequently challenged books in 2003 (source)

BETH: I never usually understand any reason for a book being challenged/banned, no matter what year it was raised in. I can think of occasional books where access should perhaps be restricted in a school library setting for very young children but generally, I think people should be free to read whatever they like, particularly if there’s not a solid reason for the challenging or banning. This book was published in the early nineties and although it’s slightly dated, I feel that it could still be read right now without any difficulty. As always, I get a bit dumbfounded about the issues that were raised. I think this is meant to be a work of young adult fiction, so for the age group it’s aimed at, I do think there shouldn’t be too many problems. I don’t think there’s too many incidences of offensive language – certainly nothing I found offensive anyway but I do appreciate that people are different and may be more sensitive to those aspects.

CHRISSI: I didn’t think the language in this book was overly offensive. When it’s aimed at young adults, we really need to stop thinking that they can’t handle offensive language. I’m pretty sure most young adults use offensive language. It’s everywhere! Film, TV, books, family members and peers… why should we challenge a book due to offensive language? I do think there are some moments in the book that is quite heavy going, so I think if this book was in a school library, it should have an age range on it. It’s really down to individual discretion, I think and guidance from teachers/librarians if it’s in a school.

BETH: The fact that this book was still on the list for 2003 blows my mind a little bit. There is a bit of sexual content (although it isn’t graphic) but could still upset readers so they should perhaps be aware of that. I find it very strange though that I always try and guess the reasons for challenging a book and more often than not, I’m usually wrong. I anticipated that people would have problems with the level of violence that is used in this novel and that isn’t mentioned at all. However, I do stand by what I said in my previous answer – it’s meant to be young adult fiction and I think it is probably okay to be read by that particular age group.

CHRISSI: I have definitely read more explicit books in the YA genre than this. Like Beth, I thought the violence would be a bit of an issue, but it’s not mentioned in the reasons for challenging this book. I don’t see why it was challenged in 2003. There’s definitely more to be worried about than a book like this. As I mentioned in my previous answer, it should be restricted access to the YA age range.

BETH: This book left me a bit surprised, to be honest. It’s only 200 pages so didn’t take me that long to read and I fairly flew through it as it was quite action-packed. I was intrigued by the story-line, the devastation that a family go through after their property is violated, leaving one of their daughters in hospital. I was also curious about the part of the plot that involved The Avenger and how that ended up being resolved, which was very much “heart in the mouth,” kind of stuff. I certainly didn’t expect to enjoy it as much as I did!

CHRISSI: I flew through this book. I didn’t expect to like it as much as I did. It does seem a little bit dated having being published in the 90s, but it was still highly enjoyable and so easy to read. There was a great amount of intrigue that kept me turning the pages!

COMING UP IN MAY ON BANNED BOOKS: Crazy Lady by Jane Leslie Conley.