Roland, Eddie, Susannah, Jake, and Jake’s pet bumbler survive Blaine the Mono’s final crash, only to find themselves stranded in an alternate version of Topeka, Kansas, one that has been ravaged by the superflu virus. While following the deserted I-70 toward a distant glass palace, they hear the atonal squalling of a thinny, a place where the fabric of existence has almost entirely worn away. While camping near the edge of the thinny, Roland tells his ka-tet a story about another thinny, one that he encountered when he was little more than a boy. Over the course of one long magical night, Roland transports us to the Mid-World of long-ago and a seaside town called Hambry, where Roland fell in love with a girl named Susan Delgado, and where he and his old tet-mates Alain and Cuthbert battled the forces of John Farson, the harrier who—with a little help from a seeing sphere called Maerlyn’s Grapefruit—ignited Mid-World’s final war.

I thoroughly enjoyed my re-read of the Dark Tower series last year and it’s finally time for my review of the fourth book, Wizard And Glass which just happens to be my favourite book written within this epic world. As a result, I apologise in advance for the nauseating gushing which is bound to occur as I talk about this wonderful, unforgettable addition to the series. See – there I go already!! My first memories of Wizard And Glass are actually connected with a stay in hospital when I was nineteen years old, undergoing investigations for unexplained abdominal pain. My amazing mother bought this book for me, knowing I was an already avid King fan, not realising that it was the fourth book in the series and I hadn’t read the other three yet. To be fair, it can *almost* be read as a stand-alone, despite the fact that it carries on immediately after the dramatic events and a nail-biting cliffhanger of an ending in The Waste Lands.

Stephen King, author of Wizard And Glass, the fourth book in the Dark Tower series.

I say that it could potentially be read as a stand-alone because Wizard And Glass is actually Roland Deschain’s story from when he was a young man, fell deeply in love for the first time and earned his reputation as a formidable gunslinger. Obviously I would definitely advocate starting this series from the beginning (although if you’ve read my previous reviews, please don’t be too put off by the first book, The Gunslinger! It gets a LOT better i.e. The Drawing Of The Three) but because it goes back to Roland’s tumultuous past, it reads like an entire story all on its own. From the very first page, as Roland starts to tell his story to his ka-tet – Susannah, Eddie, Jake and the adorable Oy to the last page, where his story is complete, we learn so much more about our strong male lead and what events have happened in his life to make him the man he is today. The reader sees a much more vulnerable, emotional, tender and human side of Roland and because of this, begins to fully understand why he now hides all his feelings behind such a hard and unyielding exterior. 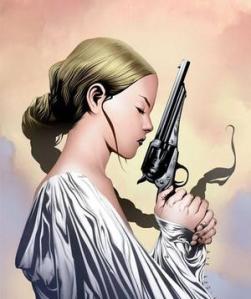 Susan Delgado, love interest of Roland in Wizard And Glass

My heart went out to Roland from the very first moment of this book. I love the way in which he opens up to the people who become his dearest and most loyal friends by sharing with them such an important and life-altering part of his past. His story is moving, devastating, eye-opening and thrilling but more than anything, it’s impossible to put this book down without feeling such a deep sense of longing to pick it right back up again. It’s always a pleasure to sit down with one of King’s books of course for me personally, but there was something about Wizard and Glass that affected me in all the right ways. His strength of characterisation is superb as always but he has a real gift for writing exciting action sequences tempered with softer, more gentle moments between the huge cast of characters that seem to come at just the right time. It allows the reader to recover from the frantic, fast pace of the narrative and appreciate the stories and personalities behind each individual we meet and what their motives, hopes and dreams for the future are.

I truly believe you won’t find characters as personable and delightful – Roland and his buddies Alain and Cuthbert, the sweet innocence and determined bravery of Susan and Sheemie and the villainous, dastardly elements of Rhea the witch and The Coffin Hunters to name a few. However, what I find absolutely incredible is how King manages to give each individual their own qualities and unique personality, despite the enormous cast that he has created across the series in general. This is a novel packed full of adventure, thrills and surprises combined with the author’s classic element of making the reader feel just a little bit uncomfortable but nevertheless, fully invested and enthralled with the world that he has built.

COMING UP SOON: Wolves Of The Calla (The Dark Tower #5)