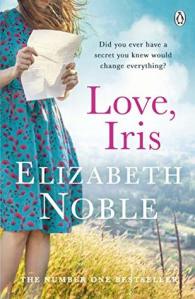 Tess has a secret – one which is going to turn her life upside down in just nine months’ time.

The only person she can confide in is her beloved grandmother. But Iris is slipping further away each day.

Then chance brings a stranger into Tess’s life.

Gigi’s heart goes out to Tess, knowing what it’s like to feel alone. She’s determined to show her that there’s a silver lining to every cloud.

As their unlikely friendship blossoms, Tess feels inspired to open up.

But something still holds her back – until she discovers Iris has a secret of her own. A suitcase of letters from another time, the missing pieces of a life she never shared.

Could the letters hold the answers that Tess thought lost for ever?

An uplifting, unforgettable story about keeping secrets, taking chances and finding happiness where you least expect it.

CHRISSI: I knew you would initially be unsure of reading this book. What was it that made you unsure?

BETH: Ah, you know me too well. I’m afraid to say that one again it was the cover that was initially a turn off for me. I have to be compelled to pick up a book and a beautiful cover can be the magic moment where I’ll pick it up and want to read the blurb on the back. I’m afraid with Love, Iris, if I ordinarily saw it in a bookshop, I wouldn’t even pick it up to read the back. I would (wrongly) assume that it wasn’t going to be the book for me. I’m glad that reading books with you as part of our “Talking About” series is making me pick up books that I wouldn’t normally and being pleasantly surprised as a result!

BETH: Interspersed amongst the story are Tess’ letters to her developing baby. Did you enjoy these and what do you think they added to the narrative?

CHRISSI: Discuss the novel’s varying depictions of marriage. What kinds of relationships seem most likely to fail or succeed? Ultimately, do you think marriage is seen as a positive or negative in the story?

BETH: Such an interesting question. Okay, so we have various relationships in the book – we have the older generation of Iris and her husband who were very happily married compared to Gigi and Richard who have been married for years and have three grown children together but recently Gigi has been feeling unhappy and taken for granted and decides a period of separation would be a good idea. Then there is Iris’ grand-daughter Tess who is pregnant but not in a relationship and her mother Donna who has raised her as a single parent. I don’t think you can ever predict what relationships will fail or succeed to be honest and I also don’t think marriage is the be all and end all. As Gigi has shown, you can be married for years and then realise you’re not happy and personally, I supported her decision to bail out if she wasn’t content. You never know what’s going to happen in the future and how your relationship with your partner will evolve (or not evolve which is sometimes the problem!) On a personal level, I’ve been with my partner since 2002, we aren’t married and have no plans to do so and we are perfectly happy. I don’t think marriage is always necessary to ensure a successful relationship.

BETH: Tess has quite a difficult relationship with her mother, Donna. How do you think this developed as the story continued?

CHRISSI: She really did have a difficult relationship with her mother. I think it developed into a sort of understanding throughout the story. As Tess began to lose Iris, and become a mother herself, I believe it made her want to sort things out with her own mother. I think losing a close friend or family member gives you perspective and makes you want to sort out issues that could be in relationships. I don’t think Tess and her mother will be the closest, but I think their experiences brought them together.

CHRISSI: Did you have a favourite character? If so, who and why?

BETH: I can’t choose! I have so many favourite characters in this novel. I loved our main female leads – Tess, Gigi and to a certain extent, Iris (although I would have loved to know even MORE about her life). I felt that as characters they were all personable, easy to like and I found myself rooting for their happiness from the very start of the story.

BETH: What effect does keeping secrets have on each of the characters? What about when they reveal these secrets?

CHRISSI: I feel like both Tess and Gigi’s secret was better for them when it came to light. Tess was hiding her pregnancy and although her boyfriend was a bit of a turd about the pregnancy, her life was definitely on the up after the secret was revealed. Gigi wasn’t happy in her marriage. I think she had kept it secret for so long to keep up the happy family vibe with her children that she clearly adored. Even though it was tough for her to leave her marriage and upset her children, it was the best thing for her. No one wants to stay in a relationship like that. Life may have been a little messy for Gigi, but the future could be brighter. Iris… oh I loved that character. She kept so many secrets about her brother Tom from her family. I wish we could have known more from Iris. Secrets was definitely a common theme in this story but mainly love, family and self-discovery.

CHRISSI: Discuss whether you agree with Wilf’s entreaty to Iris that ‘love is the simplest thing in the world.’ How do the relationships in the novel support or contradict this statement?

BETH: Wow. Tough. It is and it isn’t is my answer! I think it can be very easy to fall in love with someone – after all, it doesn’t take much effort and is one of the most wonderful feelings in the world. However, I think staying in love with someone can be very difficult, both of the individuals have to make a concerted effort with each other otherwise they can end up in a stagnant place where they take each other for granted, much like Gigi and Richard find themselves. Also, being in love with someone where the feelings aren’t reciprocated as strongly can be quite dangerous because you open up your heart enormously and leave yourself vulnerable to becoming very hurt.

CHRISSI: I would! I thought this was a great read! 🙂

8 comments on “Talking About Love, Iris by Elizabeth Noble with Chrissi Reads”