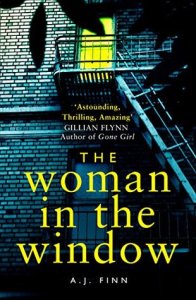 What did she see?

It’s been ten long months since Anna Fox last left her home. Ten months during which she has haunted the rooms of her old New York house like a ghost, lost in her memories, too terrified to step outside.

Anna’s lifeline to the real world is her window, where she sits day after day, watching her neighbours. When the Russells move in, Anna is instantly drawn to them. A picture-perfect family of three, they are an echo of the life that was once hers.

But one evening, a frenzied scream rips across the silence, and Anna witnesses something no one was supposed to see. Now she must do everything she can to uncover the truth about what really happened. But even if she does, will anyone believe her? And can she even trust herself?

CHRISSI: What was your initial impression of Anna? Did it change as the book went on?

BETH: I’m not sure what I thought of her to be honest. It’s perfectly obvious she was an unreliable narrator as I’ll get to in the next question but as a reader, I’m always prepared to give a character a chance and get to know more about them before I make a judgement. I felt terribly sorry for her because it was obvious she had severe mental health problems with her agoraphobia and because I knew this was a psychological thriller I knew that nothing she would witness from her window was going to be good!

BETH: Why did you think Anna was so obsessed with observing her neighbours? How did it make her feel more connected to the outside world?

CHRISSI: There have a been a number of thrillers/suspense stories with an unreliable narrator suffering from a drinking problem. Why do you think the authors make that choice? How does drinking impact the story they’re telling?

BETH: Initially, this book very much reminded me of Girl On The Train i.e. mature female protagonist with a drinking problem witnesses something horrific. In this way, I think that it’s a narrative I’ve read about before so the author has to do something special to make it a bit different. Obviously, drinking can impair your judgement especially if you’re drinking to the extent that our female lead is AND mixing it with strong medication so things you see can be mis-interpreted. In this novel, we’re not even sure if what Anna sees actually happened as the drugs she is taking do have the potential to cause hallucinations….did it happen or didn’t it?

BETH: If this book were to become a film how do you think it would translate? Would you watch it?

CHRISSI: Hmm…I think it could potentially be a good film especially if an extremely talented actress was cast as Anna. I think the agoraphobia gives it an edge that many thrillers don’t have and it would be interesting to see them tackle mental health. I’m not sure if I’d watch it though. For me, it was a little repetitive in points, but they could take some of the repetitiveness out. I haven’t watched The Girl On The Train which is a similar book. I think for me to watch an adaptation, I have to totally believe in the cast.

CHRISSI: Do you think this book has enough about it to stand out in its genre?

BETH: Personally, I think it does. As I mentioned, this trope has been done before so you have to do something different and I think with the addition of the agoraphobia, it made things slightly twistier as you knew whatever Anna did see would be more difficult for her to deal with as she wasn’t able to leave the house and raise the alarm. It was a fascinating read and I think the author did a good job in describing how debilitating and frightening this condition can be for its sufferers.

BETH: What did you think of the ending? Were you satisfied or did you want more?

CHRISSI: I was interested in the story throughout but I found it to be a little bit predictable in points. Personally, I think it was a very cinematic ending. I wasn’t overly sold by the ending, but it certainly was full of drama. It is here that I could see the book being turned into a movie. They could do a lot with it.

CHRISSI: Did the story grip you throughout or did you feel your interest go at any point?

BETH: Generally, I did find it a compelling read and one that I would recommend however, I did kind of guess what was going on towards the end which was slightly disappointing. There was a moment where I was surprised (but I won’t ruin it for anyone who hasn’t read it yet!) but as for what Anna saw out of her window – I saw it coming. I’ve done this a lot recently with thrillers I’ve read so perhaps I’m just getting better at predicting things or I’ve read too many thrillers recently?! Who can say? It didn’t affect my enjoyment though, I still thought it was a great read.

CHRISSI: I would definitely read more from this author. I thought it was a very accomplished debut and I liked the fact that the author tackled mental health.

6 comments on “Talking About The Woman In The Window by A.J. Finn with Chrissi Reads”