Dani hasn’t had an easy life. She’s made some bad choices and now she’s paying the ultimate price; prison.

With her young daughter Bethany, growing up in foster care, Dani is determined to be free and reunited with her. There’s only one problem; Dani can’t stay out of trouble.

Dani’s new cellmate Martha is quiet and unassuming. There’s something about her that doesn’t add up. When Martha offers Dani one last chance at freedom, she doesn’t hesitate.

Everything she wants is on the outside, but Dani is stuck on the inside. Is it possible to break out when everyone is trying to keep you in . . .

One More Chance landed on my doorstep courtesy of Millie Seaward and the team at Dialogue Books, a new imprint from Little, Brown publishers that “source, nurture and publish writing talent – and reach audiences – from areas currently under-represented or not covered by the mainstream publishing industry. This will include people from black, Asian and minority ethnic (BAME) backgrounds, the LGBTQI+ community and those with disabilities.”

I thoroughly support this initiative and a huge thank you to Millie and Dialogue for providing me with a copy of this gripping debut novel in exchange for an honest review. As soon as I realised this was a story set inside the British prison system, and specifically focused on the life of female prisoners, I knew it was a book I had to pick up. There’s been a lot of negative press recently about the state of British prisons and generally, it’s a topic I’m very intrigued by, both here and in other countries. I was delighted to discover an instantly compelling narrative with characters that felt completely authentic and I sped through it in no time at all.

Lucy Ayrton, author of the novel One More Chance.

This is the story of Dani, who has spent a fair few spells in prison after recurrent drugs-related offences. However, when we currently meet her, she becomes desperate that her current stay in jail is going to be her last. For Dani has something now to fight for – her young daughter, Bethany who has been taken away from her and placed with foster parents. Dani is determined to get her back but before this can happen, she has to resist any drama within the prison system (which is harder than it initially appears) go through a drug programme service so that she can “get clean,” and reduce the risk of re-offending in the future and finally, prove she can have a career and a way of providing for her baby on the outside. Things start to look up for Dani when she gets a mysterious new cell-mate, Martha who insists that she can help Dani get to her daughter. However, is it really is easy as that? Will Dani be able to resist temptation and keep out of trouble or will the thought of Bethany prove too difficult to pass up? 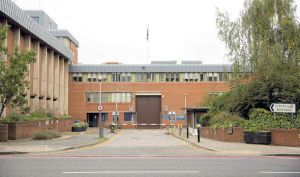 Notorious H.M. Prison Holloway in London, one of the largest female jails in Europe where our character Dani is incarcerated. It was closed in 2016 as part of the government’s overhaul of the prison system.

For what I expected from this novel, One More Chance ticked all the relevant boxes. It was a fascinating insight into the world of female prisoners and felt remarkably gritty and genuine. The author, Lucy Ayrton, is Communications Manager of a prison charity and much of this story was inspired by women she met and talked with on visits, particularly within the Holloway Mother And Baby Unit. This really comes across in the narrative, you can feel the characters bouncing off the pages with their authenticity. These people feel very real and believable and although they may have issues, it’s impossible not to feel some sort of sympathy for the situation they find themselves in.

Our female lead, Dani in particular is wonderfully interesting and I really enjoyed getting to know her. She drove me absolutely crazy with the decisions she made sometimes but in the end, I just felt a great deal of pity for her, especially the inner turmoil she experienced in being apart from her daughter. Dani often felt she needed to put on a front, especially in a system that promotes violence and the importance of never showing your fear but I could sense her vulnerability and appreciated the emotional roller-coaster that rocked her childhood and adolescence life.

One More Chance is a page turning and at times, eye-opening read about the world of female incarceration from an exciting new voice in fiction that really understands what she’s writing about. I’m looking forward to seeing what Lucy Ayrton does next!