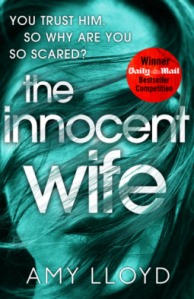 Twenty years ago, Dennis Danson was arrested and imprisoned for the brutal murder of a young girl. Now he’s the subject of a true-crime documentary that’s whipping up a frenzy online to uncover the truth and free a man who has been wrongly convicted.

A thousand miles away in England, Samantha is obsessed with Dennis’s case. She exchanges letters with him, and is quickly won over by his apparent charm and kindness to her. Soon she has left her old life behind to marry him and campaign for his release.

When the campaign is successful and Dennis is freed, however, Sam begins to discover new details that suggest he may not be quite so innocent after all.

But how do you confront your husband when you don’t want to know the truth?

The winner of the Daily Mail First Novel Competition, Amy Lloyd’s The Innocent Wife is gripping psychological suspense from a brilliant new voice in crime fiction.

CHRISSI: What were your expectations for this book? Did it live up to them?

BETH: I didn’t really have any expectations to be honest! I’ve read quite a lot of either psychological or domestic thrillers recently so I was hoping (as I always do with this genre) that it would be something a bit unique and would keep me engaged throughout. First of all, I did think this novel had a really interesting premise, especially in the beginning when Samantha is writing to Dennis in prison but unfortunately, I don’t really feel that it hooked me in the way I wanted to be hooked. It’s a quick, easy read but I didn’t really connect to any of the characters.

BETH: How do you think this novel compares to other books in the genre?

CHRISSI: Sadly, I don’t think this book stands out in its genre. It has brilliant moments, but I was left a little underwhelmed by the story. It didn’t grip me right from the start which I usually expect from books in this genre. For me, it was an okay read but I don’t think I would remember it months on when I read so widely in the genre.

CHRISSI: Did you find this book predictable in any way?

BETH: I’m afraid so. It was pretty obvious to me from the start what was going to happen in Samantha and Dennis’ relationship and how it would then develop as they got to know each other a bit better. Sadly, I did anticipate the slight twists and turns in the narrative so I was never surprised or shocked about the direction the story took.

BETH: Did you find Samantha relatable? What advice would you give her if you were her friend?

CHRISSI: I personally didn’t relate to her. I think she’ll be relatable to many in a way because so many people have dysfunctional relationships and that’s certainly what Samantha’s relationship is like with Dennis! If I was Samantha’s friend I think I’d encourage her to seriously think about the company she kept!

CHRISSI: Was the relationship between Samantha and Dennis plausible?

BETH: Not for me, I’m afraid to say. I can understand that Samantha had insecurities and vulnerabilities and she became quite carried away with the idea of a relationship with Dennis but I think the reality of what that relationship was going to be like hadn’t really dawned on her until she was trapped in that situation. However, I didn’t quite understand why when she had initial misgivings about the relationship she didn’t use that opportunity to remove herself and that was slightly frustrating. I guess it wouldn’t have made a good story if she had, right?! Personally, I’m not very good at suspending my disbelief and although the author has artistic license to do whatever she wants to do with her own narrative, I couldn’t find it believable enough to become invested in the relationship of her characters.

BETH: What did you think of the ending? Were you surprised/satisfied?

CHRISSI: I was a little disappointed by the ending. I don’t really want to spoil it, so I can’t say too much, but I wasn’t satisfied. I felt like it was incredibly rushed. I was left with some questions and found myself re-reading it to try and get my head around it. In my opinion, that’s not a sign of a great ending.

CHRISSI: At which point in the book were you the most engaged?

BETH: There were several points where I was quite intrigued. Firstly, the beginning where Samantha was first communicating with Dennis and the story had the potential to go in any direction. Secondly, where she first meets Dennis at the prison and I was curious to read about their initial reactions on meeting and communicating with each other and lastly, the ending which was quite fast-paced until the eventual climax.

CHRISSI: It would depend on the plot. I think the premise of this book was interesting, it just wasn’t an amazing read for me!