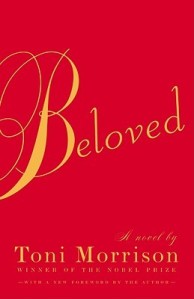 Staring unflinchingly into the abyss of slavery, this spellbinding novel transforms history into a story as powerful as Exodus and as intimate as a lullaby.

Sethe was born a slave and escaped to Ohio, but eighteen years later she is still not free. She has too many memories of Sweet Home, the beautiful farm where so many hideous things happened. Her new home is haunted by the ghost of her baby, who died nameless and whose tombstone is engraved with a single word: Beloved.

Filled with bitter poetry and suspense as taut as a rope, Beloved is a towering achievement by Nobel Prize laureate Toni Morrison.

Welcome to the tenth banned book in our series for 2018! As always, we’ll be looking at why the book was challenged, how/if things have changed since the book was originally published and our own opinions on the book. Here’s what we’ll be reading for the rest of the year:

NOVEMBER: King & King -Linda de Haan
DECEMBER: Flashcards Of My Life– Charise Mericle Harper
For now, back to this month:

In the Top Ten most frequently challenged books in 2006 (source)

BETH:  I can imagine this book being quite the force to be reckoned with with it was published in the late 1980’s. Its dark elements, tragic history of black slavery and quirky, fantastical moments make it quite a unique read but as always with many of our banned books, I’m struggling to understand the reasons why it has been challenged. As you may already know by now, I do understand offensive language isn’t for everyone and I respect people’s views on that. In fact, I don’t like to use bad language in my own reviews but that’s just my own personal thing, I don’t mind it when I see it in other bloggers reviews. However, I don’t think that you can challenge/ban a book based on this reason. After all, we can’t help but be exposed to offensive language, no matter how much we may try and avoid it – on the streets, on the television, interacting with strangers in normal, social instances….you get the picture. And for me, there wasn’t a single incident in this novel where I thought the language was extreme enough to warrant this challenge.

CHRISSI: Like Beth, I can see that when this book came out in the late 80’s that it would have been quite a challenging and ground breaking book. Personally, I don’t think there’s any point in banning a book because of offensive language. Goodness knows, I know some of my children in my class hear offensive language so often at home that it is almost like a ‘normal’ word to them. So to have it in literature, it doesn’t bother me too much? I didn’t think anything was overly offensive. Sure, some of the language isn’t what I’d call decent language but it’s not that vile to warrant a challenge in my opinion.

BETH: If I don’t agree with challenging or banning Beloved back in the 1980’s, I certainly don’t agree with banning it now. ESPECIALLY for the reasons noted. Yes, sexual acts are alluded to but it’s never explicit or grossly indecent and as for “unsuited to age group” I wonder who this book is actually marketed for because I was under the impression that this is an adult novel or at least able to be read by young adults? And if it was written for the young adult market, I really don’t think there’s anything in there that the younger generation wouldn’t be able to handle. In fact, it could be a vitally important read for those wanting to learn a little something about African-American slavery.

CHRISSI: I don’t agree with it being challenged now. Language is heard so much more these days that some of the words don’t have as intense of a meaning as they do back then. I’m not sure who this book is aimed at, if it was teenagers I don’t think I’d use it educatively, but for young adults/adults, I really don’t see a problem with it. It touches on some very important moments in history so it SHOULD be read in my opinion.

BETH: I’ve already read two books by Toni Morrison – A Mercy before I became a blogger and The Bluest Eye, (which Chrissi and I covered on our Banned Books series way back in 2015!) the latter of which I thoroughly enjoyed. As a result, I was really looking forward to Beloved, particularly when I discovered the subject matter, a topic which I’m always happy to educate myself on a bit further. I’m sad to say that I have really mixed feelings about this book. There were points when I wanted to rate it four stars, others when I wanted to rate it two stars and generally, I was left somewhere around the middle. There were heart-breaking parts of the narrative and some moments of truly beautiful writing but overall, I was just left feeling a bit confused and underwhelmed. I’m not sure if the more fantastical side of the story really worked for me personally and consequently, my enjoyment of the novel as a whole suffered.

CHRISSI: I have to admit that I didn’t quite ‘get’ this book which does make me feel sad as I know that so many people love Toni Morrison. Like Beth, I did think there were brilliant moments, but on the whole I felt a little flat after reading it. There’s no denying that this is a beautifully written book and I can see why Toni Morrison is a popular author. I just didn’t feel like there was enough going within the story line to keep me enthralled. I am certainly a reader that loves a plot driven story and I feel like Beloved is more character driven. I didn’t connect with the characters like I wanted to and this affected my enjoyment of the story.

CHRISSI: It’s not for me!- I wasn’t blown away by this book. Perhaps my expectations were too high?

Coming up on the last Monday of November: we review King & King by Linda de Haan.