The Themis Files is a deeply human story about a world-changing alien discovery.

17 years ago, a young girl named Rose fell through the ground in the Black Hills and found herself in an underground chamber filled with gleaming symbols, lying in the palm of a giant metal hand. Now a physicist, Rose leads a research team struggling to determine the hand’s origins. When another giant limb is discovered, she quickly devises a method for unearthing the hidden pieces, convinced there is an entire body out there waiting to be found.

Halfway around the globe, Kara watches helplessly as her helicopter shuts down over a pistachio field in Turkey. That’ll leave a mark, but she’s about to crash her way into what might be the greatest endeavor in human history.

This is a hunt for truth, power, and giant body parts. Written as a series of interview transcripts, journal entries and mission logs, The Themis Files tells the tale of a handful of people whose lives are inexorably linked by the discovery of an alien device and the commotion that follows.

The books I buddy read with Janel who blogs over at Keeper Of Pages will always be a bit special to me as not only do we always have a wonderful experience reading them but we have a great chat about them too, always managing to be on exactly the same wavelength (sister from another mister, Janel?) and so far, we’ve given every single one we’ve read together five stars which I believe proves we really know how to pick some good ones! I’ve been stupidly excited about every book we’ve read together as usually they’ve been ones that have been languishing on my TBR for the longest time but I was particularly excited about Sleeping Giants. I managed to get my hands on a Goldsboro signed first edition with sprayed black edges and it’s one of the most gorgeous books I think I’ve got in my whole collection. Luckily, the story inside lived up to the beauty of the cover and although Janel and I had some teeny tiny issues with it, I still count it as one of the best books I’ve read this year.

As a work of science fiction, Sleeping Giants focuses mainly on two female lead characters, both strong, determined and intelligent. Rose is a physicist who when she was a young girl, happened to fall down a hole in the ground and land in the palm of a giant metal hand. Now she is part of the team under the instruction of an incredibly mysterious man who start to find other pieces of this alien-esque body dotted all around the world. With the assistance of Kara, a trained pilot who becomes vitally important to their mission, the team attempt to assemble the body parts into a whole, robotic creature whose purpose in the beginning is suspected but not quite fully known. As they start to try and move the robot, they discover further functions and capabilities of the strange object that have the potential to change the world for ever. All individuals involved in the mission become dangerously obsessed, almost to the point of madness as piece by piece, the possibilities in front of them are slowly revealed. 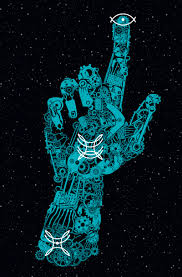 I have to admit, when I first received this book in the post, back when I used to be a member of Goldsboro Book Of The Month Club, I wasn’t very sure. I’m not a huge fan of science fiction as a genre BUT have found myself swayed in the past couple of years or so with fantastic books like The Sparrow and The Long Way To A Small, Angry Planet. I think I can speak for both Janel and myself when I say that we were absolutely delighted by the story we found within, particularly the way it was set out – in the form of journal entries, files, telephone conversations etc. (Note to myself: “That may be why it’s called The Themis FILES, Beth!”). It was so very easy and compelling to read in this format and incredibly tempting to just read one more entry rather than putting the book down.

However, I think I was most bowled over by the availability of fiesty, sassy and clever female leads that we received in the form of Rose and Kara. They were so magnificent to read about in their own way – one quieter and methodical but with a steely confidence and no nonsense attitude and the other with well…..just an attitude. Only joking, I adored Kara’s fight, intolerance for stupidity and refreshing way of saying exactly what she was thinking disregarding any consequences to herself. Of course, we do start to see both women’s vulnerabilities and get some idea of what make them the women they are in the present time but when it comes to that explosive cliffhanger of an ending, it’s perfectly obvious that a whole lot more is going to be revealed in the next book in the series.

I think our only quibble with this novel (and it is a small one) is that because of the format, you don’t really get a linear narrative. That is, we might get a journal entry about a certain event that happens and we won’t get another file until a couple of years down the line in the future. This unfortunately had the effect of making us feel like we had skipped over really important parts of our characters lives and as a result, this made it slightly disjointed and jumpy, where we had to adjust quite quickly to the rapid movements ahead in time. It wasn’t difficult to adjust, not by any stretch of the imagination and we both still thoroughly enjoyed it but sadly, there were those occasional parts where I believe the reader could potentially think: “Wait, what have I missed?!”

Saying that and I really do want to end this review on a positive note because I still highly, HIGHLY recommend this book, this was honestly such a minor issue that I don’t think it would affect anyone’s enjoyment at all. I would still give a definite five stars for the story within this novel, I just have to be honest and if I have a slight doubt about jumps in the plot, I can’t give it the full five unfortunately. However, it was so, so close and I’m really excited to announce that Janel and I will be one hundred percent continuing with the series and reading the second novel, Waking Gods for our buddy read in October!

Thank you once again to Janel for an amazing buddy reading experience. Check out her amazing review HERE.

Past buddy reads with Janel @ Keeper Of Pages

The Fireman by Joe Hill – check out my review HERE and hers HERE.

Eleanor Oliphant Is Completely Fine by Gail Honeyman – check out my review HERE and hers HERE.

The Nightingale by Kristin Hannah – check out my review HERE and hers HERE.

The Seven Husbands Of Evelyn Hugo by Taylor Jenkins Reid – check out my review HERE and hers HERE.

Sleeping Giants by Sylvain Neuvel was the forty-fifth book in my quest to conquer Mount Everest in the Mount TBR Challenge 2018!