The forest is a deadly place.

Nobody knows this better than Penny. She has spent her whole life hiding in the darkness, shielding herself from the terrors that watch and wait within the trees.

When Penny is abandoned and left for dead in the forest, she is forced to navigate this terrifying labyrinth in order to return home to her son and take revenge on the woman who tried to kill her.

But the murderous creatures with the false smiles aren’t the only monsters to lurk in the forest, and some demons may be closer than she thinks.

First of all, a huge thank you to Anne Cater for inviting me to take part in this blog tour and to Unbound Publishers for sending me a copy of this astonishing novel in exchange for an honest review. I haven’t read any horror stories for a little while now and as it’s one of my favourite genres, it was about time that I re-visited it once more! So when the email from Anne flew in and I read the synopsis, I couldn’t have be quicker in replying to her with an ardent: “Yes please!” Horror can be a bit hit and miss sometimes. For me, an author has to really get under my skin, build up that tension and drama and the terrifying moments have to be convincing and genuinely scare me. I mentioned in a review recently that events in a horror novel or film are often a lot more frightening if the creature/monster/villain is not completely seen, in other words – if it is only hinted at and left in shadow.

Has anyone seen the film Jeepers Creepers? As soon as I saw the monster in all its glory, I wasn’t scared anymore. (To be perfectly honest, I found it quite funny and not in the least scary but that says more about my sense of humour than the creature in the film, I think!!). Anyway, I digress – back to The Log House. What I’m trying to say is that Baylea Hart pulled off the scary moments in her novel wonderfully well. She doesn’t completely unearth the creature, there’s mention of the colour grey, and long, claw like hands but we don’t ever get the full detail about what it looks like. For me, this made it MORE frightening and definitely ensured my thorough enjoyment of the novel as a whole. 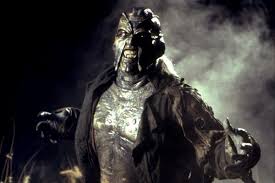 Jeepers Creepers – you don’t scare ME! The Log House? Umm…. you do!

So, the synopsis above already does a wonderful job of explaining what this novel explores and I don’t think I could do much better. Basically, we follow a young mother called Penelope who lives in a safe house with a number of other residents, including Mary whom she has had a bit of history with. Penny ends up in the forest on her own because of the bad blood between Mary and herself. She has a head and ankle injury and is quite far away from home but that’s the least of her problems. A safe house is necessary for the inhabitants of this world because of the creatures that stalk around, attracted by light and invoke instant death if you’re unlucky enough to come across one. Penny must fight to avoid these creatures as she treks through the forest to get back to her son and to avenge herself upon Mary. It’s not long though before she discovers that there may be worse things out in the woods then these monsters.

I had a sneaking suspicion that I might enjoy this book just from the dedication alone, where I felt a certain kinship with the author as soon as I read: “To my family, for giving me Stephen King books to read as a child. This is all your fault.” I thought to myself if the author of this novel has taken any inspiration from the Master Of Horror himself, (who just happens to be my all-time favourite author), I’m in for quite the ride and I was certainly correct in my initial assessment! This book is disturbing, graphic, horrifying and tense in equal measures and I was absolutely gripped by both the character of Penny and the electrifying plot. Penny is not a particularly likeable character and has made a couple of shady decisions in her past which has led to her fractured relationship with Mary but I couldn’t help but admire her gutsy, determined nature. She goes through absolute hell in those woods, not only in hiding/avoiding these awful monsters but struggling through the pain of a horrific injury combined with how she deals with several dangerous situations with some very different kinds of monsters along the way.

This is a richly imaginative tale of horror from a talented writer that made me catch my breath and provoked multiple shivers down my spine. I was particularly unnerved by the fact that Penny realises that when everything goes deathly silent, the creatures are near and she has no other option but to hide. No bird song, no leaves rustling – just utter silence.

“Watch for the silence, said the voice in her head. It’s the only warning you’ll get.”

Personally, I found this incredibly frightening and I could instantly see this being played very well in a film. As the narrative continues, we learn much more about Penny and her past, the creatures themselves and how one simple, distorted sound: “Haaaaa,” has the potential to chill your blood.

Baylea Hart is an IT Technician by day, horror writer by night and a reader everywhere in between. In 2013 she wrote, directed and edited the short film Behind the Door, which won a Top 50 spot in the Bloody Cuts “Who’s There?” competition and as of 2015 has over 410,000 views on YouTube. In October 2015 she won the Bristol Horror Writing Competition with her short story Jack in the Box, and her short story Eyes Open was published in the 12th issue of 9Tales Told in the Dark. Baylea’s debut novel The Log House was published by Unbound in 2018.

Thank you once again to Anne Cater and Unbound Publishers for inviting me to take part in this blog tour, I’ve had a wonderful time doing it. The Log House was published in January 2018 and will be available as a paperback and e-book. If you fancy some more information don’t forget to check out the rest of the stops on this blog tour for some amazing reviews!

4 comments on “Blog Tour – The Log House by Baylea Hart”