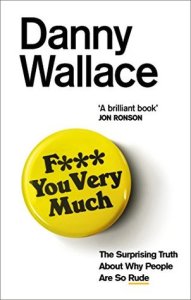 You’re not imagining it. People are getting ruder. And this is a serious problem.

Did you know that even one rude comment in a life and death situation can decrease a surgeon’s performance by as much as 50%? That we say we don’t want rude politicians, but we vote for them anyway? Or that rude language can sway a jury in a criminal case?

Bestselling writer and broadcaster Danny Wallace (Yes Man, Awkward Situations For Men), is on a mission to understand where we have gone wrong. He travels the world interviewing neuroscientists, psychologists, NASA scientists, barristers, bin men, and bellboys. He joins a Radical Honesty group in Germany, talks to drivers about road rage in LA, and confronts his own online troll in a pub.

And in doing so, he uncovers the latest thinking about how we behave, how rudeness, once unleashed, can spread like a virus – and how even one flippant remark can snowball into disaster.

As insightful and enthralling as it is highly entertaining, F*** You Very Much is an eye-opening exploration into the worst side of human behaviour.

First of all, a huge thank you to Chloe Rose and Ebury Press via Penguin Random House for sending me a copy of Danny Wallace’s new book in exchange for an honest review. A big thumbs up to blogger friend Stuart at Always Trust in Books for letting them know that I might enjoy this one too! And enjoy it I certainly did. I’ve read a few of the author’s previous books in my pre-blogging days such as Join Me and Yes Man and thoroughly enjoyed his writing style and sense of humour so I was pretty confident that I was going to feel the same about this one, especially when I found out the subject matter – rudeness, a HUGE bugbear of mine. I devoured this book in about a twenty-four hour period and loved every moment, particularly when Danny draws on personal experience and of course, the geek in me enjoyed when he drew on scientific research to illustrate his (many) great points.

Danny Wallace, British author of F*** You Very Much.

So, I don’t think I need to go into too much depth about the contents of this book – the title and subtitle pretty much do the job for me! It’s a fascinating insight into how our society has got ruder and Danny explores the reasons that may be behind this gradual change in attitudes. The book itself is divided up into certain sections, to name a few of my favourites: Bad Manors, Women And Rudeness, Policing Rudeness and Rudeness And Power. It’s not until the author delves deeper into the subjects of why people have become so rude that I really started to notice things in my own life that I have found more difficult in recent years. To take a personal example, I have a chronic illness and can’t stand up for long periods of time but have to make a long commute into London each day. The rudeness I’ve encountered when people glance at you and then deliberately look at their phone to avoid giving you a seat is frankly, unbelievable and can be quite upsetting.

Then there’s trolling on the Internet, particularly Twitter, a hotbed of vicious snipes and negativity. Danny recounts his own personal experience with a troll who sent him an incredibly nasty message. I won’t go into what happens with this pathetic excuse for a human being but let’s just say Danny feels somewhat vindicated in the end. Throughout the entirety of this book, the author talks about the topic of rudeness with a wry sense of humour that at points, had me cackling like a banshee.

Ah….if only all Internet trolls were as cute as this!

Although it was one particular “hotdog” related incident that was his inspiration for opening up this fascinating talking point, he also quotes some historical incidents and, as I’ve mentioned real, hard evidence to back up his claims. Some of the information he quotes is hysterical, for example, how can one naked bottom save lives and change the behaviour of a group of people? Other parts are far more sobering, like the shocking effect one stressful, rude incident can have on the performance of a doctor/surgeon leading to potentially mistakes being made and lives being at risk.

Why have we got ruder? It’s hard to say but it seems to be a growing problem. Danny invites you to think of TV personalities that are famous for being rude and people LOVE them for it. Think of Simon Cowell who says exactly what he thought on TV talent shows, Anne Robinson who delighted viewers with her put-downs on The Weakest Link and Gordon Ramsay where everyone is on tenter-hooks, waiting for him to blow his top with some poor, unsuspecting cook.

Gordon Ramsay said this by the way, not me. Complaints his way please!

Finally, there is the perhaps obvious blatantly rude person in the media at the moment. You know, the one who was elected as President Of The United States. A lot of people didn’t see it coming but come it did and personally, I continue to be horrified with everything that comes out of his mouth. If that kind of person can be elected to be in charge of a country, well…..the less said about that the better otherwise I’ll just get into a massive rant. I’ll just say that the author describes Trump’s personality and the things that he has done/said so far perfectly when relating it to the topic of the book, but somehow manages to stay light-hearted and bring out that fantastic humorous side that he is well known for.

There’s so much to savour in this book, tasty tid-bits that I know I’m going to remember and quote to others like the information junkie that I am! It explores so many topics, including class, power, the modern world and women with such delicious detail that I could go on and on about the wealth of information covered within. One final thing – the author describes how if you experience someone being rude to you, you are statistically more likely to be rude to another person later on, maybe that day or perhaps a bit later, depending on how the incident has affected your state of mind. This absolutely horrified me as I would hate to be “that person,” and I would hope that I’m not intentionally rude to ANYONE. However, when I mused on it a bit more, I realised that it may be true. I’ve been grumpy, been upset and I’ve probably mistakenly snapped at someone else because I felt hard done by! It’s horrible to think of and I’ll certainly be checking my reactions in the future. Meanwhile, if you’re into non-fiction and fancy a few smiles and things to mull over, F*** You Very Much is definitely the book for you!

6 comments on “F*** You Very Much: The Surprising Truth About Why People Are So Rude – Danny Wallace”