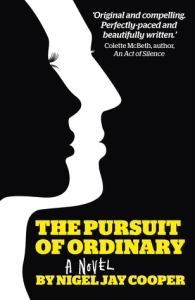 After witnessing a fatal car accident, a homeless man wanders the streets of Brighton, trying to ignore the new, incessant voice inside his head. But he can’t forget the crash, can’t get the face of the woman cradling her dying husband out of his mind. She stared into his eyes, his soul. He has to find her.

Is Dan ill or has he really been possessed by the spirit of Natalie’s dead husband, Joe? If he hasn’t, why does she let him into her home so easily? Does she have secrets of her own? The Pursuit of Ordinary is a twisting tale of modern life and mental health where nothing is what it seems…

First of all, thank you so much to Anne Cater and to Roundfire Books for inviting me to take part in this blog tour and for sending me a copy of the novel in exchange for an honest review. Who could resist saying yes to a book like this when you read THAT synopsis? This is the first book I’ve read by the author, Nigel Jay Cooper but I can promise you now it won’t be the last. This book surprised and moved me in equal measure and for different reasons (which I’ll go into a little later) but let me just say briefly, the description, although fantastic, gives no clues as to what dark treasures this novel actually holds. With wonderful representation of mental illness, including highlighting a condition I knew very little about, The Pursuit Of Ordinary takes the reader on a journey into the struggles of life, particularly when you’re embroiled in events that seem beyond your individual control.

A representation of mental ilness?

Our story is set in Brighton and involves a number of main characters. First there are husband and wife, Natalie and Joe whose lives change forever when Joe is involved in a fatal car accident. Natalie is left on the road cradling her husband’s head and begging for help from passers-by when a homeless man appears in her field of vision. Little does she realise how important this man will be in her life. His name is Dan and before long, he tracks down Natalie with his head in turmoil. He strongly believes that he has become possessed by the spirit of her husband Joe who is desperate for him to get in touch with Natalie as he has promised her he will: “always find a way back to her.”

Natalie is obviously traumatised by the events that have occurred and continue to occur but learns to trust Dan, eventually welcoming him into her house. Her only condition is that he try to get a job and begin to piece his life back together. She doesn’t become aware for quite a while that Dan is severely mentally ill and she begins to wonder about the stories that Joe is telling her, when he “comes forward,” and speaks in quite a different accent compared to Dan’s Brighton twang. Then as the two get closer, the reader realises both Dan and Natalie have deep secrets that they may be terrified to share with the other and individual demons that they must conquer themselves.

I loved the way this was written. Not only did we get Natalie and Dan’s perspectives but we also got the deceased husband Joe’s version of events. It was really interesting how the author chose to tell a certain event from Joe’s point of view and then we hear the exact same event from Natalie’s perspective. You might think that this sounds slightly repetitive and unnecessary but I can assure you it doesn’t read like that at all. It’s fresh, enlightening and made me incredibly curious to read on and figure out what was going on with this interesting threesome. I will always, always applaud a writer that decides to focus on mental health, especially the way he represented Dan – as a normal person, which of course he is, with just a few issues that plague him from time to time. 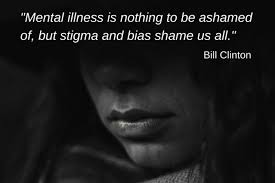 I’ve had my own battles with mental illness, including depression, anxiety, low self-esteem and unfortunately, emotional/physical abuse. I really resonated with so many parts of this story and the way the characters reacted to the circumstances they were put under. Yep, that was me. Yep, I did that. Why did I do that again?! It’s crazy, but when you’re in that situation, it’s very hard to see a way out, the control the person has over you is extreme and you’re never quite the same person afterwards or, it takes you a massive amount of time to recover. I felt so much, remembered huge amounts of my own past and re-appreciated finally getting out of the situation like our characters attempt to. This book is fantastically revealing and makes you think about what people might be going through in their own personal lives, even if they put on a happy face and make out like everything is fine.

I’ve applauded this author and now I’m going to salute him for tackling a wide range of potentially difficult but very important subjects, including emotional abuse, low self-esteem, homelessness, mental illness, bulimia and the dynamics of relationships with family and friends (although for many of our characters these dynamics are sadly non-existent). It’s honest and authentic writing with the plot progressing and ending not as “fairy-tale” as you might expect. But then, you can’t wrap mental illness up nice and neat with a bow, it’s an ongoing healing process that might be with you for life, it’s all about the slow and steady recovery and I feel optimistic our characters are going to a much better place.

Author, writer, father, runner. Not always in that order. Born in London, England, Nigel lives in Brighton with his partner, their two children and greying ginger dog. His first novel, Beat The Rain, was published in July 2016 and became his publishers bestselling title. It was also nominated for the Goodreads Choice Awards 2016 for Best Debut Author. His second novel, The Pursuit of Ordinary, will be published in 2018. Nigel was co-founder of global advocate marketing platform Qubist (Qube Media) and previously worked as a writer and editor for Channel 4 Television and as a newspaper sub editor. He’s a sometime marathon runner and occasional actor and singer. Sometimes his brain switches off and lets him sleep, but not that often.

Find Nigel on his Goodreads page  at: https://www.goodreads.com/author/show/15065567.Nigel_Jay_Cooper

Thank you once again to Anne Cater and Roundfire Books for inviting me to take part in this blog tour, I’ve had a wonderful time doing it. The Pursuit Of Ordinary was published on the 27th April 2018 and will be available as both a paperback and an e-book. If you fancy some more information don’t forget to check out my fellow bloggers stops for some more fantastic reviews!

Link to book on Goodreads: https://www.goodreads.com/book/show/36313350-the-pursuit-of-ordinary