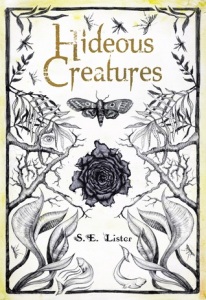 An extraordinary, magical odyssey into the dark heart of the New World . . .

Arthur Hallingham is the youngest son of an English earl. He’s on the run from his former life – from a family where painful, half-understood secrets lurk.

Arthur travels on a slave ship to the coast of America. Amidst the teeming squalor and vaulting ambitions of the New World, he encounters Flora, the tough daughter of an outlaw, and Shelo, a native medicine man with mysterious powers who seems to have a plan for him.

The three set off on a journey through the thick forests and along the wide rivers of the lush southern wilderness. As they near their destination, Shelo’s terrible and destructive purpose is gradually revealed.

Hideous Creatures is a rich, beautiful and compelling novel that will appeal to fans of Audrey Niffenegger, Erin Morgenstern and Neil Gaiman, by a young debut author destined for literary stardom.

Along with The Immortals by the same author, the wonderful booksellers at Mr B’s Emporium Of Reading Delights recommended this book to my sister and I when we attended a reading spa (highly recommended by the way, if you’re ever in Bath, please do it!). Hideous Creatures is actually the author’s debut novel but I read the two books out of order as the story-line of The Immortals just appealed to me a bit more. Now that I’ve gone backwards and read the author’s first book second, I can really appreciate both the beauty of her prose and how far she has come as a writer since penning Hideous Creatures. In complete contrast to how I felt about The Immortals sadly, I was not a big fan of this novel. It boasts the author’s characteristic, quirky style and obviously beautiful way with language but unfortunately, I felt that was all it had going for it. I couldn’t connect with any of their characters and got slightly confused over their back stories. In truth, it was a bit of a slog to get through although I have to mention there are various things to appreciate along the way.

This is a novel about a young male protagonist, wealthy Englishman Arthur Hallingham who flees from his home after learning a terrible secret hidden within his family. He has always chased adventure and longed to see far off lands abroad so manages to secure passage upon a ship and ventures to the American wilderness. It isn’t long before he meets up with two other individuals, outsiders like himself and also people who are nursing a secret in their past. They are Shelo, native medicine man who performs a strange service for those who seek him out and Flora, daughter of an outlaw who comes into their group quite suddenly but ends up becoming an integral and very important part of their circle. Hideous Creatures follows their journey as Shelo continues to carry out his peculiar and terrifying rituals and Arthur ruminates on his colourful past in England.

I have to admit, when I started this book I was quite excited. Obviously I’ve mentioned the exquisite nature of the writing which anybody with a love for the clever way our language can be used will fall head over heels in love with. There is the beginning of Arthur’s journey on the ship and when he meets Shelo for the first time which was a fascinating aspect of the story (although a bit difficult to read as it did involve him being placed in an awful house which was used for illegal, brutal abortions). All of this (aside from the horrifying abortion aspect) was enjoyable and intriguing to read and I found myself wanting to know what would happen to Arthur, even if I didn’t particularly like him much as a character. Then we meet Shelo and again, I was curious, especially about this ritual he carries out on a nightly basis that leaves his clients screaming but strangely very satisfied! Finally, Flora appears and I did like her immediately as a fiery and independent female protagonist BUT I don’t feel the potential with her character was really reached and she just seemed to fade into the background which was a shame.

Generally, as the novel continued, I felt my enthusiasm for it wane even further and it wasn’t long before I found all the strange goings-on a little too hard to stomach. Not in the fact it was gruesome at all, but that I just didn’t feel I cared enough about any of the characters, their past secrets or what would become of them. I am bitterly disappointed, as I mentioned I loved the author’s second book, The Immortals so much but because of the strength of that novel, I would still be so excited to read anything else this author were to write in the future. Funnily enough, I’m still very glad I read this story, even though I didn’t end up loving it, it was worth it for the gorgeousness of the words alone.

Hideous Creatures by S.E. Lister was the twenty-fourth book on my quest to conquer Mount Everest in the Mount TBR Challenge 2018!