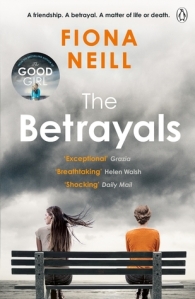 When Rosie Rankin’s best friend has an affair with her husband, the consequences reverberate down through the lives of two families.

Her daughter Daisy’s fragile hold on reality begins to unravel when a letter arrives that opens up all the old wounds. Rosie’s teenage son Max blames himself for everything which happened that long hot summer. And her brittle ex-husband Nick has his own version of events.

As long-repressed memories bubble to the surface, the past has never seemed more present and the truth more murky.

Sometimes there are four sides to every story.

Who do you believe?

Told through the eyes of four members of the same family, The Betrayals takes an unflinching look at contemporary family life, explores the nature of memory and desire and asks whether some things can ever be forgiven.

CHRISSI: Had you heard of the author before reading this book?
BETH: I have to be honest and say no, I hadn’t. Looking at the author’s back-list of books however, the cover of The Good Girl does ring a few bells so perhaps I had seen it around when it was released. I’m really pleased that Richard and Judy picked this book for their book club here in the UK as it’s definitely brought an author to my attention that I wasn’t really aware of before.
BETH: Were you aware while reading that some characters’ narratives were unreliable? If so, at what point did you start to realise this? Why do you think people mis-remember significant events?
CHRISSI: It took me a while to realise this. I think it was about half way through when I started to question every character. I can’t pinpoint an exact moment when I thought ‘Hmmm…’ but I started to become uncomfortable with some of the characters throughout the novel and as the intensity built. I think it’s interesting that people do mis-remember significant events. Perhaps we build things up in our memory or remember the parts of it that we want to, meaning that sometimes we mis-remember the parts we don’t want to remember fondly! Memory is such a strange thing to me. I can’t explain it!
CHRISSI: This is part thriller, part family drama. Explore the family relationships in the novel.
BETH: I loved the mixture of thriller and drama in this novel. Throughout it all, there’s this element of mystery and unreliable narrators (which I always adore!). The relationships are particularly fraught in this story for a variety of reasons but mainly due to the divorce between Rosie and Nick which affect both their children, Daisy and Max in different ways. Daisy and Max blame their father for what has happened and this affects their relationship with him in the present time and especially with his new fiancee, Lisa. There are so many other relationships to be explored in this novel though. We also have the relationship of Lisa with her children and her ex husband Barney which is very fragile and the relationship between the siblings and step-siblings which is difficult because of Daisy’s OCD and events that have happened between the four children in the past when Rosie and Nick were still a couple.
BETH: The strongest bond in this novel is the bond between Daisy and Max rather than between the children and their parents. Why do you think this is?
CHRISSI: I think Daisy and Max are always there for each other from their childhood. They had such a strong bond. Daisy became reliant on Max when she was completing her OCD rituals. Daisy and Max stick together despite their parent’s relationship falling apart around them. I saw Daisy and Max as a team, despite Max being frustrated by Daisy’s OCD. Max felt guilt for something he had done to Daisy and I think his guilt made him want to be there for her in later years.
CHRISSI: Discuss the portrayal of Daisy’s OCD in the novel.
BETH: It’s great to see any portrayal of mental health in novels and making sufferers feel that they are not alone is so vitally important. I am not a sufferer myself but I thought the OCD was portrayed really well and quite sensitively and it certainly made me feel more sympathetic to those people that have no choice but to live with the condition. It also taught me things I hadn’t been previously aware of like its effect on other people around the sufferer and how it can have knock on effects on health, memory etc.
BETH: Who betrays who in this novel? In your opinion which is the worst betrayal?
CHRISSI: Goodness, it’s more like who doesn’t betray in this novel! I’m actually torn between the worst betrayal. I hate when best friend’s betray, I hate when partner’s betray… basically none of it sits right with me. I actually found Nick’s betrayal to be the most heartbreaking. He lets down his wife and his children. 😦 Bad times!
CHRISSI: I found myself disappointed by the ending. Without spoilers, what did you make of the ending?
BETH: I think I texted you ARRRGH at the time of reading it? Yes, that’s exactly how I felt. I had thoroughly enjoyed the story from the very first page and perhaps my expectations were a bit high but I wasn’t entirely happy with how open ended and unresolved the ending felt to me. I understand that maybe the author wanted us to make up our own minds about what happens next and sometimes I love this in novels but in this story, it felt frustrating and I was desperate to know what happened next.
BETH: Would you read another book by this author?
CHRISSI: I would! Even though I was SUPER frustrated by the ending. It had gripped me from the start and then I was annoyed by the unresolved, open ending. Others I’m sure would love it though!
Would WE recommend it?:
BETH: But of course!
CHRISSI: Yes!
BETH’s Star rating (out of 5):