Dev and his friends are back with more mind-bending tech in this third installment of the Inventory series.
The World Consortium is recruiting more agents to defend the most advanced technology the world isn’t ready for, and it’s up to Dev, Lottie and Mase to train them up for action. But will they be ready before Shadow Helix’s next strike? And has Dev uncovered all the secrets of his past, or is there more to know about his special abilities?

Hello everyone and welcome to a very special post on the blog tour for the latest book in the fantastic Inventory series by Andy Briggs. The series began with Iron Fist which you can see my review of HERE and continued with Gravity which I also hosted a guest post for HERE. Today, Andy has been kind enough to tell me his favourite children’s books whilst he was growing up. This is what he has chosen:

There are many books that inspired me while growing up, but I have selected a few:

STIG OF THE DUMP – by Clive King

I must admit this was a title I hadn’t read for a long time, but even now, at the grand old age of *# I still remember my first impressions on reading this spellbinding book. All you need to know is that it’s about a boy called Barney who discovers a caveman called Stig living in a dump in an old chalk quarry (presumably before his future race driving career). The rest is pure magic.

Yes, the same Arthur Conan Doyle who created Sherlock Holmes, it’s not that common a name. This has always been my favourite Doyle book and, although not strictly an MG book, I read it when I was 11 or 12 and it captured my imagination so much that, when I became an alleged adult, I eventually travelled to the very flat-topped mountains in Venezuela that inspired Doyle. Eccentric Professor Challenger leads a party of explorers into the depths of South America to discover that dinosaurs still exist. It’s an exciting adventure story and one that instilled a sense in me that the world is still a wondrous place with many amazing things left to discover…

When David and Tony’s uncle Septimus Cobwebb sits in a fairy ring and vanishes into another realm, the fun begins. This is a magical series of books in which our heroes are sent on missions to various fantastic places, encountering amazing creatures and people…

Sadly, these books are no longer in print, which is a crime in my view. You just can’t have much more fun than Captain Cobwebb and the Red Transistor, which got me through a particularly terrible bout of chicken pox. Find them, read them!

WARLOCK OF FIRETOP MOUNTAIN – by Steve Jackson and Ian Livingstone.

I distinctly remember buying this book (from a sadly long extinct indecent bookstore in Prescot, Merseyside called Reading & Writing). I had no idea what I was getting myself into. This was the first book that launched the Fighting Fantasy series and showed me that a book can be so much more than passive story.

For those who don’t know, this was one of the first books in which you made decisions by turning to different pages, thus affecting the outcome of your story. You were able to fight monsters using a clever system that decided you fate on the roll of a dice. It was, and still is, the perfect form of escapism… and all without a computer.

Finally, I have to put in an honourable mention for the ASTERIX books by Goscinny and Uderzo. They are fabulous graphic novels – beautiful art, wonderful characters, exciting stories with a grounding in history.

The world is split between Tintin and Asterix. But only one has a magic potion which makes them invincible… 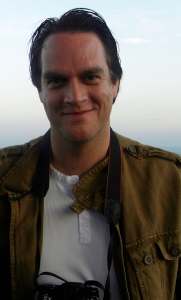 Andy has extensive experience working on multinational co-productions and has worked in comics, books, TV, film and trans-media projects.

Andy wrote and Executive Produced Legendary, currently the most successful independent UK/Chinese co-production. Released in China and grossing $5 million in the first week, with a theatric US release in 2014. With his brother he worked on Hollywood features such as Judge Dredd and Freddy vs. Jason and TV shows for the SyFy Channel and Netflix.

He wrote and co-created Secret Agents, a trans-media interactive spy experience for children, currently on at the Discover Centre, Stratford. He has 16 books and graphic novels published in the UK and around the world.

He has written 20 books and graphic novels published in the UK and around the world. In 2016 his latest feature, Crowhurst, will be released.

A huge thank you to everyone involved in this blog tour and to Andy for providing me with his favourite children’s fiction (and possibly some ideas for my Kid Lit challenge!) Why not check out the rest of the stops on the tour where you’ll find some fantastic reviews from my fellow bloggers? Black Knight (The Inventory #3) was released by Scholastic Press on 6th April 2017 and is available from all good bookshops now.