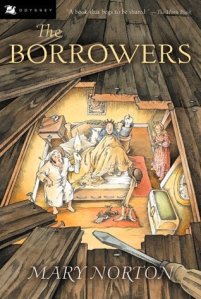 Beneath the kitchen floor is the world of the Borrowers — Pod and Homily Clock and their daughter, Arrietty. In their tiny home, matchboxes double as roomy dressers and postage stamps hang on the walls like paintings. Whatever the Clocks need they simply “borrow” from the “human beans” who live above them. It’s a comfortable life, but boring if you’re a kid. Only Pod is allowed to venture into the house above, because the danger of being seen by a human is too great. Borrowers who are seen by humans are never seen again. Yet Arrietty won’t listen. There is a human boy up there, and Arrietty is desperate for a friend.

The Borrowers was one of those classic children’s books that I never took the opportunity to read when I was younger although I am aware of the gist of the story, mainly through the film that was made with British actor Jim Broadbent. One of my favourite films when I was younger (and a bit of a guilty pleasure!) was Honey I Shrunk The Kids and I remember being fascinated about how frightening the human world must look to someone no bigger than an ant so I was looking forward to seeing how this particular world would be portrayed.

The borrowers are little people who live in “normal-sized” humans houses, mainly under the floorboards or behind furniture to escape notice if they possibly can. Of course, they have to live and eat the same way as you or I do so they designate a member or members of their family as borrowers who sneak out whilst the house is quiet and borrow items that they need from the regular humans. This can include bits of leftover food or drink, or things they can find useful round the house like cotton reels to use as stools, blotting paper to use as carpets or even postage stamps which they can hang as portraits on their walls.

The particular family we learn about in this story is the Clocks, (named as they live behind the large grandfather clock in the hall) consisting of father and mother Pod and Homily and their only daughter Arrietty. Arrietty has never known life above the floorboards of their little den although she can occasionally see a bit of the garden and the sunshine through the grating in the wall. Her mother and father are very protective of her but soon realise that they have to be honest and warn her about the dangers of being seen by the humans that live upstairs.

Far from being horrified though, Arrietty is enthralled by their tales which sound far more exciting than the life she currently leads. She begs her mother and father to let her go out borrowing one time with her father Pod to experience what life is like beyond the clock. Although extremely worried, her parents reluctantly agree and Arrietty gets to see this whole new magical world where everything is much larger, much more thrilling and indeed much more dangerous than she could have ever imagined. However, when Arrietty herself is seen by a young boy who is living at the house at the time, she realises the small world she has become so accustomed to has the potential to change forever.

This was a lovely story to read and I particularly enjoyed the illustrations in my Kindle version by Joe Krush which added  an extra bit of magic to an imaginative and exciting plot. Arrietty was probably my favourite character in the narrative – I have to admit, her mother Homily annoyed me slightly and the young boy in the story was also ever so slightly irritating although I warmed to him a lot more when he started helping the Borrowers out as the tension rose and their lives became threatened. I can imagine a lot of readers falling in love with the independent, brave yet soft-hearted Arrietty and I admired her resilience as everything she has known comes crashing down around her. There are a lot of great things about the story that young children will love and Mary Norton certainly writes in an entertaining way that kept me engaged until the end.