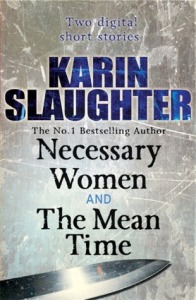 What’s The Mean Time all about?:

It’s a hot summer’s day and twelve-year-old Peanut and her cousins are being driven into town on the back of a trailer drawn by Uncle Toby in his tractor. It’s Peanut’s ‘mean time’ age and she’s about to do something she’ll regret…

As regular readers of my blog may already know, I’m a big fan of Karin Slaughter’s novels but I’m definitely starting to enjoy her short fiction just as much. The two stories in this bundle I bought for my Kindle are as different as night and day and after the brutality that was Necessary Women, I was expecting more of the same when it came round to reading The Mean Time. Perhaps it is the way the author begins the story – our heroine, Peanuts, is in a truck connected to our Uncle Toby’s tractor with her cousins and he is taking them all to the local shop to get some sweets. Before her current age of twelve, Peanuts always assumed that her uncle enjoyed playing with the kids and it is only become apparent that he is “mentally slow,” something that is a huge deal for her at an age when even the slightest difference can make a huge difference to how she is perceived by others.

Peanuts is already having quite a hard time comparing her life to that of her cousins (her father’s family) who are clearly poor but work hard (usually physically) for every penny of their money. She admits that her and her sisters have never wanted for anything as their father never wished for them to have as poor an upbringing as he himself had so they are quite literally spoilt rotten. Visiting their poorer relations who can’t understand why her father would want to make more money than that required to live on and who seem to have a different notion of what hard work actually is is an eye-opener for her as she gets older and notices/desires the opinions of others a lot more.

The author describes Uncle Toby’s mouth as having a tooth missing which could lead to him having a somewhat “sinister,” appearance to those who did not know him. Immediately I thought I was going to be taken down this dark and twisty pathway Karin Slaughter does so well and with the previous story still very fresh in my memory, I don’t think you could blame me! However, this was categorically NOT the case and the story that unravelled was quite different. The climax is an altercation in the shop between Peanuts and Uncle Toby that she bitterly regrets as soon as it has happens but unfortunately can never take it back. The following quote, which I loved, sums up the story beautifully in better words than I can ever write:

“This was a time in my life when I keenly searched for disapproval or agreement in the eyes of strangers. I was halfway into my twelfth year, a walking box of hate and hormones. This was my mean time, and the approval of someone who did not know me mattered much more than the opinions of those who knew me best.”

The Mean Time stands on its own as a great piece of short fiction and perhaps I shouldn’t compare it too much to the story it was bunched with. Both are brilliant in very different ways and I believe it shows the versatility of Karin Slaughter as an author perfectly. This narrative took me right back to my own adolescence when I desperately needed the approval of others and said/did things I instantly regretted. The author managed to capture the essence of what it is to be a teenage girl wonderfully and although I was slightly surprised by the ending I now think it bitter-sweet and simply how it should have been. I’m hoping that even though it is a slight departure from the fiction the author usually writes, fans will enjoy it just as much.

NEXT SHORT STORY: Duet by Kate Mosse from the collection The Mistletoe Bride And Other Haunting Tales