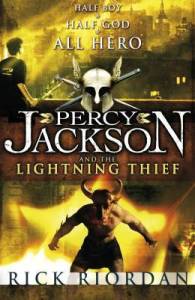 Percy Jackson is a good kid, but he can’t seem to focus on his schoolwork or control his temper. And lately, being away at boarding school is only getting worse-Percy could have sworn his pre-algebra teacher turned into a monster and tried to kill him. When Percy’s mom finds out, she knows it’s time that he knew the truth about where he came from, and that he go to the one place he’ll be safe. She sends Percy to Camp Half Blood, a summer camp for demigods (on Long Island), where he learns that the father he never knew is Poseidon, God of the Sea. Soon a mystery unfolds and together with his friends — one a satyr and the other the demigod daughter of Athena — Percy sets out on a quest across the United States to reach the gates of the Underworld (located in a recording studio in Hollywood) and prevent a catastrophic war between the gods.

This is the final book in our Kid-Lit series for this year, the beginning of the hugely popular Percy Jackson series and my very first read from Rick Riordan. Well, we’ve certainly ended this year with a bang as this was a real cracker of a book and I can now understand why it is so loved by children (and probably adults) the world over. Our hero is Percy Jackson, a twelve year old boy whom when we first meet him seems just like an ordinary kid, apart from the fact that he changes boarding schools every year due to his behaviour which could be described as disruptive. Professionals have tried to explain his sometimes unruly character as a mixture of things ranging from dyslexia to ADHD (attention deficit hyperactivity disorder) but we soon find out that Percy Jackson is probably the furthest away from being a normal kid as you can get. For Percy is a demi-god or half-blood, sired by a rather famous Greek God and a mortal woman.

Of course he does not know this in the beginning but he begins to get an inkling that he might be a bit special after a strange incident occurs on his class trip one day. Well, meeting and destroying one of Hades leathery-winged, fang-baring Furies isn’t one of your everyday occurrences, especially as he was so certain she was a normal, run of the mill school teacher! However, it turns out Percy is incredibly different from your average demi-god being the son of one of The Big Three: Zeus, Poseidon or Hades which gives him some amazing powers but also leads to him being a jucier target for monsters in the mortal world. Desperate to keep him safe Percy’s mother sends him to Camp Half-Blood, a place for the children of Gods to train, harness their powers and go on exciting quests.

It is not long before Percy finds himself in possession of a great and dangerous quest – to find and return Zeus’s beloved lightning bolt which was stolen from him and is now believed to be in the Underworld, a place usually reserved for the dead and which very few return from alive. As if this wasn’t bad enough, Percy himself is being accused of the theft and if the bolt is not returned by the end of the summer solstice Zeus has vowed to wreak an almighty war on the world. Percy and his new friends, Annabeth (daughter of Athena) and Grover, a very sensitive and loyal satyr must find their way to Hades dominion and bring the lightning bolt back to Olympus before all hell breaks loose. Quite literally. That is, if the three friends don’t manage to get themselves killed by monsters in the process.

Wow. This book ticked so many boxes for me it was unreal. I’m a huge fan of Greek mythology and was lucky enough to study it at school at one point so it was truly delightful to remember this colourful host of characters and their back stories. I think the author managed to mix the world of Mount Olympus with a contemporary setting beautifully and there were some rib-ticklingly funny moments when the two words collided. For example, who knew that Ares, god of war was a biker? Or that Charon, boatman of the River Styx in the Underworld felt that he deserved a decent pay rise after all his years of service? I loved the characters, felt they all brought something different and fresh to the story and would definitely appeal to children of varying ages. The adventures are truly gripping and action packed and it was such a page turner that I almost missed my stop on the tube, so lost was I in Percy’s little world! It looks like this is going to be an amazing series to follow and already I’m wondering when I can fit the next book, Percy Jackson and the Sea Monsters into my busy schedule!

First edition cover of The Lightning Thief from Wikipedia: