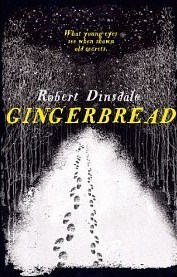 Fairy tale and history, wilderness and civilisation collide in this brilliant and magical new novel from the author of Little Exiles.

In the depths of winter in the land of Belarus, where ancient forests straddle modern country borders, an orphaned boy and his grandfather go to scatter his mother’s ashes in the woodlands. Her last request to rest where she grew up will be fulfilled.

Frightening though it is to leave the city, the boy knows he must keep his promise to mama: to stay by and protect his grandfather, whatever happens. Her last potent gifts – a little wooden horse, and hunks of her homemade gingerbread – give him vigour. And grandfather’s magical stories help push the harsh world away.

But the driving snow, which masks the tracks of forest life, also hides a frozen history of long-buried secrets. And as man and boy travel deeper among the trees, grandfather’s tales begin to interweave with the shocking reality of his own past, until soon the boy’s unbreakable promise to mama is tested in unimaginable ways.

This is the first book of Robert Dinsdale’s that I’ve read and picked up this copy from a wonderful Oxfam charity shop near Tottenham Court Road in London where the synopsis immediately intrigued me and begged to be bought and devoured. I love fairy tales, fairy tale re-imaginings, alternative fairy tales… you name it. Just the mere mention of the word fairy tale will ensure it gets put in my basket and after reading lots of positive reviews of this novel on Good Reads, I was eager to get stuck in and form my own opinion. Gingerbread is like nothing I’ve ever read before and although fairy tales play a huge part in this novel, it’s not your average “happily ever after” read. If I had to compare it to something, I would probably choose Roald Dahl’s version of Cinderella from his Revolting Rhymes book (not entirely sure why!) except that the story is incredibly unsettling and plays on your mind long after the book has been closed.

Our narrator for Gingerbread is a young boy (unnamed at least in the beginning) who has moved in with his grandfather (known as Papa) in Belarus with his mother who is herself dying of cancer. Before she passes away, the boy’s mother manages to extract two promises from her son. One, that he will scatter her ashes in the forest by the cottage where she used to live in her childhood and two, most importantly, that he will look after his grandfather, no matter what. Unfortunately, the boy is about to discover how hard it is going to be to keep these promises to his mother. Papa is hugely reluctant to go into the forest but after a lot of pestering the boy manages to persuade him to go there so that he can fulfil part one of his mother’s wishes.

The problem is, now that Papa has arrived in the forest at his old cottage, he becomes increasingly loath to leave it again which is okay at the start as the two ensconce themselves safely within the house. The boy has always enjoyed the magical stories his papa tells him and indeed he seems to have a gift for luring the listener deep within a time where a Winter King wars against enemies of the West. It is not long however before everything slowly begins unravelling leading to the cottage being abandoned, the two living in make-shift shelters in the woods and practically starving and the stories that Papa tells becoming more frightening erring on the monstrous. The boy stops going to school and is filthy, thin and very concerned about the transformation he sees day by day in his grandfather’s character. The lines between fiction and reality become blurred and when a family with a girl called Elenya moves into the cottage it could be a desperately needed lifeline to bring the boy and his grandfather back to civilisation. Or, it could be very dangerous for them all.

This was such an intriguing novel and definitely not what I expected when I first picked it up. I loved the way in which the author used historical fiction blended in with fantasy and even at some points horror, to create a mish-mash of genres that fit so perfectly in this unique story. It’s a fairy tale yes, but a very different one and I really enjoyed the pockets of darkness that Robert Dinsdale placed within the narrative to illustrate a descent in mental health that takes the characters back to their very basic selves. I think the phrase “survival of the fittest,” definitely applies to this story and there are certain depths you think as an individual you would never stoop to but perhaps when your life is on the line, this attitude no longer holds weight and you have to fight to stay alive.

For some parts of the novel, you have to suspend your disbelief which wasn’t a problem for me personally but I can understand why some people may find it difficult or too unbelievable. In this way I thought Papa was a fantastic character and loved exploring his murky depths but my heart also bled for the boy who at the end of the day is just trying to keep his beloved mother’s last wishes and look after his grandfather. The addition of Elenya was also a nice choice, bringing new life to the story and it was interesting to follow her growing relationship with the “wild boy.” This book probably isn’t for you if you like your endings all wrapped up with a little bow and everyone living in harmony together – it’s incredibly dark and twisty and will play with your mind for days after finishing it. However if you’re a big fan of the darkness and subtle horror like me, read this book immediately (and maybe don’t go into the woods on your own).