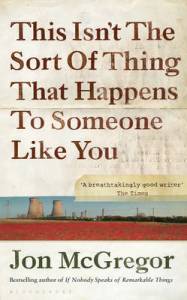 What’s Airshow all about?:

In Airshow a grandfather is taken to see the base he was stationed at during the war and it brings back painful memories.

Jon McGregor manages to surprise me every single time I read one of his stories. I seem to always forget when his collection rolls around that his stories can vary in length, this one was only three pages and is going to prove very difficult to review! Okay, so at the beginning of the story we are told that a family is on their way back from a funeral (whose, we are not sure) and they think it would be a treat for the grandfather if they stopped at the base he was stationed at during the war. He does not say much at first, seeming at a loss for words and just looks at the aircraft in the base from behind a wire fence before telling his family that it was the first home for his family, recalling how his wife used to push the pram up and down the road as the nearby forest and fields were too muddy. Has the family come from his wife’s funeral? We are never told. It is only afterwards we find out:

“Later, they learned that the grandfather had worked as an armourer, loading munitions into the heavy bomber aircraft and cleaning out the gun-turrets and bomb-bays when the aircraft returned. The task would at times have involved the removal of bodies and body-parts, but that was never discussed. From this airfield, squadrons had flown out to destroy whole towns; burying households beneath rubble, igniting crematorial fires, busting dams and drowning entire valleys. Some civilians were killed. The war was won.”

I think it’s absolutely amazing how much the author gives us with just one paragraph and it was probably that paragraph above that affected me most in the entire story. The fact that the grandfather does not discuss the horrors that he must have seen during the war (especially if removing body-parts is involved) and the way that the author describes the war in those last few sentences with emotive words like destroy, burying, igniting, busting and drowning. But it is in those last two short sentences that seem to sum up the theme of this very short story, in other words – yes, the war was won. But at what cost considering the civilian losses?

The final paragraphs of this very emotional story involve the family noticing an airshow going on at a modern RAF base, full with vintage war aircraft ready to fly and dazzle the crowds. I don’t want to say too much about the ending but it has the same feel as the rest of the story. I felt that the message the author was trying to get across was the futility of war and how it is not remembered nowadays in the way it should be in that there can be too much glamour and fun associated with it. For a story which is merely three pages long I found it quite heavy going but in a positive way as I felt really affected by the author’s writing which proves he is doing his job right. I think a lot of it is open to interpretation, which I loved, and perhaps somebody else might get a completely different message? For me personally, it’s Jon McGregor at his finest and this story is another shining example of his huge talent for writing.

NEXT SHORT STORY: The Menace by Daphne du Maurier from the collection The Breaking Point