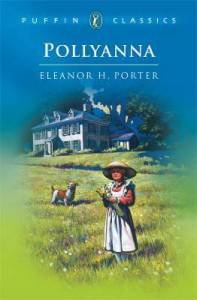 A miraculous story about the power of optimism.

When an orphaned Pollyanna moves in with her maiden aunt, she transforms the lives of everyone she meets with her optimism. She uses the “glad game” her father taught her to appreciate what she has – until one day something so terrible happens that even Pollyanna doesn’t know how to feel glad about it.

Pollyanna was one of those stories that actually passed me by in childhood so I was excited to read it for the first time as an adult and as part of our Kid-Lit challenge. The story opens by introducing us to a lady called Miss Polly Harrington whom we understand from her maid Nancy, is quite a cross and particular sort of person that lives alone in a large house. This all changes however when she receives a letter informing her that her brother in law has died and her niece Pollyanna is now an orphan. As a result, she now feels it her reluctant “duty” to take Pollyanna into her house and care for her. What she isn’t expecting is a little girl like Pollyanna, who changes her life and whole disposition forever.

Poor Pollyanna hasn’t had the easiest of lives. After losing her mother, she was raised by her minister father and the infamous Ladies Aid, who we hear a lot about in the chapters to come. Even though her family was poor, her father was an eternal optimist and told her there was always something to be glad about, even turning it into a game. So when Pollyanna desperately wanted a doll and the aid package that arrived contained a pair of crutches (which obviously made her sad) her father turned it into something to be glad about. What was that? That she should be GLAD that she didn’t need crutches!

When Pollyanna arrives at the house, she immediately puts into action the “glad” game with everyone that she meets in the town – all except her Aunt Polly, who does not want to know about anything concerning her brother-in-law. As it was him who invented the game, Pollyanna has to stop herself from trying to explain it to her Aunt at every opportunity. As a result of all this wild optimism going round, Pollyanna manages to help many people in the town, including a bedridden lady and a man called John Pendleton, both of whom are notorious for being difficult, angry and self-pitying characters. Her cheerful disposition and way of seeing the brighter side of life make her beloved amongst the townspeople and it is only when something terrible happens to Pollyanna that her Aunt Polly understands how precious she actually is, which leads her to change her outlook and life for good.

I’m really torn about how to rate this novel! Some parts of it were very Anne of Green Gables, others What Katy Did, which are two of my most favourite children’s books ever so it was quite strange to see something so similar. I’m not sure how I would have dealt with Pollyanna’s consistent “gladness” as a child – as an adult, sometimes I have to admit it was a little grating but that’s probably just my old adult cynicism talking! I have to also confess that the message it sends out is beautiful (if you can keep it up) and I ended the novel with a slight warm feeling in my body, so perhaps it worked on some level. Encouraging children to keep a positive outlook can only be a good thing in my opinion and if it works, hey all power to Pollyanna I say!