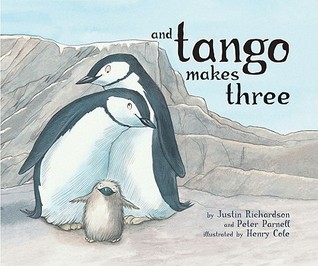 In the zoo there are all kinds of animal families. But Tango’s family is not like any of the others. This illustrated children’s book fictionalizes the true story of two male penguins who became partners and raised a penguin chick in the Central Park Zoo.

Happy New Year and welcome to a new year of Banned Books that I’m participating in with my sister and fellow blogger Chrissi Reads. We’ll be looking at why the book was challenged, how/if things have changed since the book was originally published and our own opinions on the book. This is what we’ll be reading for 2015 – the post will go out on the last Monday of each month so if you’d like to read along with us, you are more than welcome.

I Know Why The Caged Bird Sings by Maya Angelou

The Chocolate War by Robert Cormier

What My Mother Doesn’t Know by Sonya Sones

Bridge To Terabithia by Katherine Paterson

Detour for Emmy by Marilyn Reynolds

Roll of Thunder, Hear My Cry by Mildred D. Taylor

Of Mice and Men by John Steinbeck

The Bluest Eye by Toni Morrison

First published: 2005
In the Top Ten most frequently challenged books in 2012 (source)
Chosen by: Chrissi
Reason: homosexuality and unsuited to age group

BETH: Absolutely not. This was such a sweet story about two penguins that fall in love and happen to be male. It’s a picture book with some beautiful illustrations that I think children will love, especially children who are fond of animals. It was published fairly recently (2005) and in this modern world that we live in, I can’t understand why it could be challenged. Nothing about it is unsuitable or inappropriate.

CHRISSI: No!!! I am really angry that this book has been challenged. I think it is an adorable look at the different family structures that we can have. It is such an important book. I can totally see myself using it in a classroom or with a child that does come from an ‘unconventional’ family.

BETH: Definitely not. It could be such an important book for use in schools to teach children that there are more relationships in the world than Mummy/Daddy and that this is normal. Maybe some of the hatred towards homosexuality comes from the fact that these people were taught that it was wrong. If we ban/challenge these books aren’t we automatically sending a message to children that homosexuality is a bad thing?

CHRISSI: It’s educative and supportive. No. Just no.

What did you think of this book?

BETH: I absolutely loved it. I think the fact that it’s based on a true story makes it even cuter. I’m really glad that these penguins were given a chance to sit on an egg and look after their own baby (Tango). Also, I really want to go to New York and see their little family for myself now!

CHRISSI: I was so impressed. It’s so cute and simple and explores homosexuality in such a gentle way for younger children.

Would you recommend it?

CHRISSI: Without a doubt!

Please join us again next month when we’ll be discussing I Know Why The Caged Bird Sings by Maya Angelou.