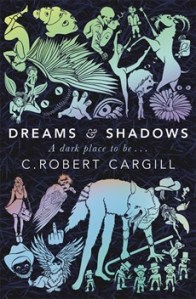 It begins with a love story. A love that is almost too sweet, too perfect. From that love comes a child. Love is wonderful.
Until someone unspeakably vile scuttles out of the shadows and steals the child away. Leaving a changeling in its place.
But this is no ordinary fairy tale…
C. Robert Cargill has written a modern American tale. A tale that twines the real world with the supernatural. A tale of faerie changed. Faerie that has danced alongside our world.
It is a realm that we visit with two boys. It is a dark, dark place to grow up.

I had never heard of this book until I visited the wonderful Mr B’s Emporium in Bath and it was one of the recommendations as part of my Reading Spa. As soon as I saw the cover I was instantly excited, ever more so when I read the synopsis of the novel. There are many weird and wonderful fairy-tale and magical characters but beware, this is definitely not a story for younger readers. The book maps the journey of two young boys, Ewan and Colby from their childhood where the magic first begins to an incredibly messed up adulthood, where the magic just won’t stay away.

The book begins “once upon a time,” as all good fairy tales should, however, I’ve already mentioned that this story is a bit different compared to your average fairy story and the author proceeds  to shatter a family’s life by replacing baby Ewan, (who makes his parents deliriously happy by the way) with a Changeling – the work of some very naughty fairies. The eight year old Colby in contrast, first comes across this strange world on one of his jaunts into the woods when his mother is having (ahem!) “visitors.” He is given strict orders not to come back before a certain time and in general, is largely ignored and emotionally abused. Meeting a djinn (genie) called Yashar seems like the perfect opportunity to turn his life around for the better, especially as Yashar is obliged to give him three wishes. One of his wishes is to be able to see everything supernatural in the faerie kingdom and beyond, one wish that he may live to regret.

On entering the kingdom, Colby meets Ewan who has been raised by the fairies after being snatched from his family. The two children, along with a faerie called Mallaidh soon become fast friends and enjoy many happy hours playing within the kingdom. All this jollity cannot last long in a tale as dark as this, and Ewan soon relies on Colby to save his life, returning him to the world of man. In the second half of the book, we meet Colby in adulthood, who has become disenchanted and world-weary. He is struggling to make a career as a musician without much luck and is tired of the supernatural world that he encounters on a daily basis. It soon becomes clear that what happened between Ewan and Colby in childhood has affected the faerie kingdom permanently. War looms, violence is plotted and Colby is soon in grave danger of losing his life. This is where some of the more dark and twisted elements of the story come into play. First of all, we have Knocks the changeling who was the substitution for Ewan when the faeries came to take him away. Believe me, Knocks is not impressed with being removed from the faeries and makes it his mission to destroy Ewan in whatever way possible. You think faeries are lovely? Think again. These faeries are ruthless, tricky, blood-thirsty, always with a hidden agenda. If Ewan is going to fight against the faerie kingdom, he has to use all his strength and cunning (and maybe a few supernatural friends of his own) otherwise things could go very badly, very quickly.

I really loved this book and found myself caught up in the author’s obviously vivid and superb imagination in creating this dark fairy tale world. The monsters and beastly creatures are amazing but my favourite character was probably Yashar the genie as we got to hear a lot of his back story making it almost like a fairy tale within a fairy tale if that makes any sense! Some of the scenes in the book wouldn’t be out of place on the big screen, and as there is quite a lot of violence and gore, I probably wouldn’t recommend it to those of us who have a weak stomach. I’m very excited also to learn that this book will be part of a series and on the strength of this book, I’ve already got the paperback pre-ordered and ready to go. A big thank you has to go to Mr B’s Emporium of Reading Delights in Bath for recommending me this fabulous read.