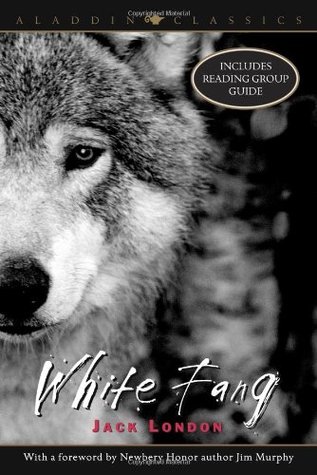 In the desolate, frozen wilds of northwest Canada, White Fang, a part dog, part wolf cub soon finds himself the sole survivor of a litter of five. In his lonely world, he soon learned to follow the harsh law of the North- kill or be killed.
But nothing in his young life prepared him for the cruelty of the bully Beauty Smith, who buys White Fang from his Indian master and turns him into a vicious killer- a pit dog forced to fight for money.
Will White Fang ever know the kindness of a gentle master or will he die a fierce deadly killer?
A classic adventure novel detailing the savagery of life in the northern wilds. Its central character is a ferocious and magnificent creature, through whose experiences we feel the harsh rhythms and patterns of wilderness life among animals and men.

I was really pleased that Chrissi and I chose White Fang as one of our Kid-Lit reads for this year, I remember loving the book as a young teenager and also enjoying the film that was made. I had a bit of a fear of wolves when I was younger and it’s safe to say that this definitely went some way to easing those frightened feelings. As the novel begins, we are transported to the desolate wild landscape of North West Canada where two friends, Bill and Henry and their sled of dogs are being chased and hunted by a pack of wolves. The author writes the scenes so vividly that you can almost sense the freezing temperatures and the savagery of the land that the two men are travelling through. They attempt to keep the cold (and wolves) at bay by means of a fire when they camp at night, but each morning they wake to find they are another dog down – taken by the pack of wolves that just seem to be getting hungrier. One wolf in particular, a she-wolf, is particularly obtrusive and shows little fear of the humans, leading the men to suspect that she has had dealings with people before. This is in fact, White Fang’s mother.

Only a small portion of White Fang’s early life is spent in the wild, although he learns enough to know what to hunt and who to avoid, for example a prickly porcupine! A group of Indian settlers end up taking the two wolves in, and it is obvious that his mother has spent time with these people before. Sadly, they are separated but White Fang quickly begins to understand the rules of this little world he inhabits. His human masters are “gods,” and have the power to recriminate him with blows if he steps out of line. He must also find his space in the pecking order of dogs which involves a lot of brawls with puppies that torment him with the knowledge that he is not like them. It’s survival of the fittest and asserting your place within the pack and White Fang soon learns that it’s fight or be fought.

Unfortunately, things can only get worse for White Fang. A man called Beauty Smith buys White Fang from his Indian master Grey Beaver, sensing potential and smelling the opportunity to make some money as he observes the wolf’s aggression, stamina and thirst for a fight. Beauty is a despicable human being who uses dogs in blood sports, pitting them against each other while men make bets on which dog will win in a fight. Indeed, he’s stepped on a goldmine with White Fang, who proceeds to win every fight he is entered in, becoming increasingly bloodthirsty, vicious and vengeful. And if he doesn’t perform to Beauty’s standards? Well, he’s clubbed to within an inch of his life, of course, so the wolf begins to associate the white “gods” with punishment and pain.

Something changes in White Fang’s next fight however – he is pitted against a bulldog whom for once, he can’t seem to bring down. A man called Weedon Scott is observing the fight and is disgusted to see how the wolf is treated. Intervening, he forcibly removes White Fang from the fight and his terrible owner and attempts to nurse the wolf back to health, the last fight having left him struggling for life. While the wolf recovers, Scott valiantly tries to win his trust, teaching him that not all white men will cause him pain. This has always been one of my favourite parts of the book, as a confused White Fang receives some much needed love and tenderness into his life and reciprocates love and loyalty in return.

Re-reading this book as an adult, I was delighted to discover that I loved it just as much as I did years ago. My heart still goes out to White Fang as he undergoes so much cruelty then is saved from near death by the hero of the story, Weedon Scott. The transformation in White Fang when he is cared for properly by Scott is amazing and when the wolf steps in to defend his master and all his “possessions,” it still almost brings me to tears. The beautiful writing by Jack London immediately transports you to White Fang’s world and I was sorry when the story ended. This is a timeless classic that I really hope a new generation takes to their heart the way I have taken it to mine.