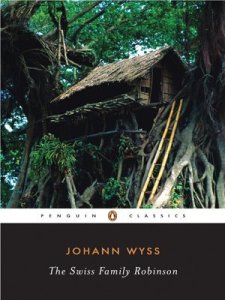 One of the world’s best-loved stories of shipwreck and survival, The Swiss Family Robinson portrays a family’s struggle to create a new life for themselves on a strange and fantastic tropical island. Blown off course by a raging storm, a Swiss pastor, his wife, their four young sons, plus two dogs and a shipload of livestock must rely on one another in order to adapt to their needs the natural wonders of their exotic new home. Inspired by Daniel Defoe’s Robinson Crusoe, this classic story of invention and adventure has fired the imaginations of readers since it first appeared in 1812.

One Christmas as a child, I received a box full of about ten mini-paperbacks that were a sort of diluted version of the classics, making it easier for younger children to understand. I remember one of these books being The Swiss Family Robinson, which was actually one of my favourites, so I was intrigued to read the “full” version as an adult so that I could compare it with what I remember. I actually found it quite a different experience! The family Robinson are marooned on a desert island after their shipwreck at sea amidst a wild storm. They must learn to survive on the island with supplies that they can forage for themselves from the damaged ship. They actually manage to do well, all things considered, which made me slightly sceptical as they seemed to have quite a lot of luck with finding particular food to eat, or equipment that they could build a tree-house with etc. In fact, if I was trapped on a desert island, I’d definitely hope it would be this one, as it seemed to have everything they could possibly require!

Some parts of this novel felt quite tedious, when they were building a certain house/piece of equipment as it went into minute detail over every process that they went through, which some readers may find quite interesting but it became a bit monotonous after the third living quarters on the island was built. Hmmm… it was almost like this family was living in paradise! I think the book became a lot more interesting towards the end when the family come across a tribe of native people (“savages” in their words) who kidnap a couple of members of the family, which leaves the father in a desperate situation of trying to find them and appease the locals to ensure their return. The king of the tribe and the missionary who was educating them in Christian values were quite intriguing characters and I felt the story became a lot more readable at this point, when it wasn’t just building another place to live, or finding a new and exciting plant.

What I didn’t expect and I’m certain wasn’t included in my version of The Swiss Family Robinson was the references to religion. Okay, fair enough, the father of the family is a pastor, so it is pretty obvious that he is going to teach his family Christian values at all times. Nevertheless, at times to me it came across as slightly forced, as the religious references were quite extensive. As a result, I think it would be a fantastic book for a church to promote, as it does teach important values – both religious and moral that we should all try to encompass. So, final thoughts, yes I was slightly disappointed as it didn’t fit with what I had read as a child, but I still think it’s a great adventure story with some good life lessons.

Pingback: Beth and Chrissi Do Kid-Lit 2014 – The Round Up | bibliobeth