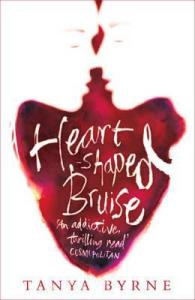 They say I’m evil. The police. The newspapers. The girls from school who shake their heads on the six o’clock news and say they always knew there was something not quite right about me. And everyone believes it. Including you. But you don’t know. You don’t know who I used to be.

Who I could have been.

Awaiting trial at Archway Young Offenders Institution, Emily Koll is going to tell her side of the story for the first time.

Heart-Shaped Bruise is a compulsive and moving novel about infamy, identity and how far a person might go to seek revenge.

I’ve been meaning to read this book for so long after it came with an extremely high recommendation from my sister and fellow blogger Chrissi Reads. It was fitting therefore that it should be the first book that I read for June 2014 – Chrissi Cupboard Month – please see my previous post HERE. It tells the story of a young woman called Emily Koll who is incarcerated prior to her trial in Archway Young Offenders Institution in London for committing a horrific crime. Whilst on the unit she begins to keep a journal, providing us with juicy snippets about who she is and how she came to be in the unenviable position she now finds herself. A the beginning of the novel Emily is writing a letter to the wronged party, a girl called Juliet, yet she makes it quite clear that she is not apologising for her actions but merely expressing her viewpoint.

We are never given the full details about what she did but the author builds detail upon detail, ramping up the pace exponentially until the dramatic finale when the truth about what happened is revealed. Or is it? Emily’s story is both gritty and compelling yet reader be warned, she appears to be quite an unreliable narrator convincing another girl at the institution that she shouldn’t believe everything she read while she directly addresses us with: “You shouldn’t either, by the way.” So, what do we know? The bare bones of the plot involves Emily’s father who she places high on a pedestal despite his shady connections with the criminal underworld. During a burglary instigated by Emily’s father, he attacks a police officer whom is Juliet’s father. Juliet is present at the incident and retaliates by stabbing Emily’s father and although he survives, he is put behind bars leaving Emily to fend for herself and seek revenge for the ruin that she believes her and her father’s life to now be. Claiming a new identity, Emily be-friends Juliet and her mission to destroy her begins in earnest.

Emily’s journal is a way for her to tell her side of the story. She has been vilified and hounded by the press, referred to as evil and a monster, and must undergo daily therapy sessions which attempts to get to the root of her issues. One of the things I loved most about this book was the way in which the author managed to create a character that although she may be the villain of the piece, moves the reader to feel sorry for her predicament and while not condoning her actions, somewhat understand why she did what she did. The writing was phenomenal, intense yet incredibly beautiful and the power of Emily’s emotions and her complexity as a character was a complete joy to read. By the conclusion, I was literally on the edge of my seat as the reader discovers the event that led to Emily’s imprisonment and believe me, it’s a nail-biter! In fact, I had to remind myself constantly that this was a debut novel, the story is both unique and outstanding and there is no doubt that Tanya Byrne is a talented addition to the YA market. There are also a lot of important issues like mental health running throughout the novel which the author dealt with in a dignified manner. After this complete gem of a story, I am really excited to read her second novel, Follow Me Down and predict huge things for this author in the future.