Peter Pan, the book based on J.M. Barrie’s famous play, is filled with unforgettable characters: Peter Pan, the boy who would not grow up; the fairy, Tinker Bell; the evil pirate, Captain Hook; and the three children–Wendy, John, and Michael–who fly off with Peter Pan to Neverland, where they meet Indians and pirates and a crocodile that ticks.

I have known about the magic of Peter Pan as long as I can remember, from enjoying the book as a child to the classic Disney film that I used to watch time and time again. I remember my sister Chrissi falling in love with Tinkerbell from the minute she first saw her on screen – actually one of the first things she learned to say was fairy although she couldn’t say her f’s properly and it came out as “sairy.” She’s going to kill me for writing that! Anyway, the magical story begins with the Darling family, Mr and Mrs Darling, their children Wendy, John and Michael and the loveable Nana, their nanny who is actually a dog, but very accomplished in her role as child minder. Mrs Darling is concerned when she finds a strange object in the children’s room and on questioning Wendy, is told it is the shadow of Peter Pan, a young boy who has been visiting them but so far she has not interacted with him and pretended to be asleep. Her mother is worried at her tale but has to attend a party that night with her husband and although she does not want to leave the children, she puts the shadow in a chest and goes out with a heavy heart. Sure enough, Peter Pan visits, attempting to retrieve his shadow and Wendy talks to him for the first time. Peter is trying to fix his shadow back on with soap and sensible Wendy knows that this is impossible so she sews it back on for him, ruffling the feathers of a jealous Tinkerbell who has accompanied Peter to the house. In no time, all the children are fast friends and Peter teaches them to fly around the room, to their great delight, before suggesting they should accompany him to Neverland where they would see other wonders such as mermaids, pirates and the Lost Boys.

The rest of the story is centered in Neverland and the wonderful adventures they have there where Wendy is automatically pronounced mother, a role which she relishes and takes good care of all the Lost Boys as if they were her own children. We also hear of the dastardly deeds of the infamous Captain James Hook, an evil pirate who has taken quite a dislike to Peter Pan. You see Peter was involved in an incident where Hook lost his arm to a crocodile, and he has a hook in replacement of that arm. Luckily for Hook, the crocodile also swallowed a ticking clock so Hook can always hear the crocodile coming, until the clock winds down that is…. (I have to admit, the crocodile remains my favourite character, and I love how he is drawn in the Disney movie!). Reading this book as an adult was a bit of a different experience for me, I still enjoyed it but sadly not as much as I thought I was going to. I enjoyed the more memorable sections i.e. Peter and his shadow, the jealous Tinkerbell, the crocodile…obviously, but other parts felt slightly flat for me. It felt like there were some amazing sections, and parts that just weren’t as exciting, so a bit of a mixed bag. Don’t get me wrong, I still think this is a wonderful children’s classic, and I think kids will continue to love it for many years to come, perhaps it was reading it as an adult which zapped a bit of the magic out for me. 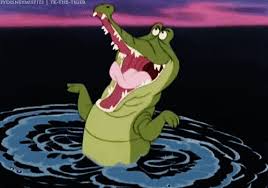