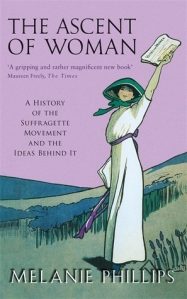 The story of the fight to gain the vote for women is about much more than a picturesque skirmish around the introduction of universal suffrage. It is an explosive story of social and sexual revolutionary upheaval, and one which has not yet ended. The movement for women’s suffrage in the late 19th and early 20th centuries prefigured to a startling extent the controversies which rage today around the role of women. Far from the stereotype of a uniform body of women chaining themselves to railings, the early feminist movement was riven by virulent arguments over women’s role in society, the balance to be struck between self-fulfilment and their duties to family and children, and their relationship with men.

The reason I enjoy reading non-fiction primarily is to learn about new things or periods in our history that interest me. So when this book was picked by one of the GoodReads groups that I participate with, I was excited to get to it. Obviously I am aware of the Suffragette movement and their fight for women’s rights to give us the vote that we all take for granted nowadays in Western countries, but I hoped I would learn a little more about the famous names like Millicent Fawcett and Emmeline Pankhurst and what they stood for. Unfortunately, I have somewhat mixed opinions over what I read. Some parts made me feel quite furious with their anti-female statements – for example, a quote by Rousseau in 1762 where he states: “The woman is made specially to please the man.” Lovely, right? However, what riled me the most is when other women would also back up these kind of beliefs, for example, one Anna Barbauld who believed the best way to acquire knowledge for a woman was to have a conversation with their brother or father and to undergo a course of reading that these male relatives may recommend. What makes this comment even more shocking is that this woman was an essayist, a critic, a poet and a children’s author, so you could say quite a learned woman and it completely baffles me to think that such an obviously intelligent woman would make it harder to get respect for her own sex.

The author takes us back to one of the early feminists, Mary Wollstonecraft and her landmark text A Vindication of the Rights of Woman to the development of the Blue Stockings literary discussion groups and building up to the height of the suffragette movement where she focused mainly on the Pankhursts – Emmeline and Christabel. I found some parts of this slightly dry and a bit hard to swallow, especially when some of the intricate details were fairly sketchy. The campaigners themselves seemed to have split into two different factions, those that went about their protests quite peacefully and the “militants,” die-hard suffragettes that would endure imprisonment, hunger strike and forced feeding, throw themselves under horses or chain themselves to buildings and would think nothing of using a spot of violence or threat to make their voices heard. However, I don’t think I’m alone in wondering if the author had some sort of issue with the Pankhursts as there did not seem to be one good thing she could say about the mother-daughter team. Don’t get me wrong, I don’t condone violence/threats in any way, shape or form but it just seemed at times the author was trying too hard to paint the Pankhursts as the “bad guys.”

There were parts of this book though that did draw a smile in regards to some of the beliefs that were held and propagated at the time. For example, women will ensure the racial superiority of the human race, 75-80% of men were infected with gonorrhoea and 20% with syphilis before the age of thirty therefore men are the source of all disease, and this particular quote which raised my eyebrows right off the top of my head:

“The human race is suffering from over-fertilisation and enforced reproduction. Man the destroyer has been at work, not woman the constructor. When man is continent the mysterious origin of cancer will be solved and cancer, with other kindred horror, will disappear. Sexual germs are not confined to the reproductive organs; they permeate the whole body. Assimilation and absorption by the female organism cannot divest them of their potential properties of stimulation and disintegration, of decay and corruption. Hence the terrible increase of cancer among the western races, who for so long have ignored the law.”

Indeed, the most influential medical authority at that time, one Sir William Acton was very concerned about the waste of spermatic fluid which came with sexual excess for men and noted that many un-married men were also intellectuals. Sorry – what?

To sum up, as a reading experience I do have many mixed emotions about this book. I felt like I learned a few things (some of which I wish I could UN-learn now!) but my beliefs were a bit shaken at times although I will probably do a bit more reading around this subject as it is very interesting to get a balanced view on a movement that was vitally important towards equality for women. No, things still aren’t perfect, especially in some countries where women are still fighting to be recognised as an equal to man, but I think without the suffragette protests in our past, life would look a bit different today, and not for the better.

5 comments on “The Ascent of Woman – Melanie Phillips”

Pingback: British Books Challenge 2014 – The Round Up | bibliobeth