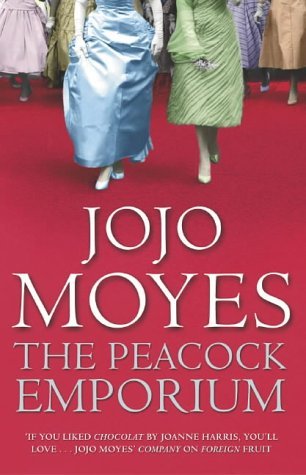 In the Sixties, Athene Forster is the most glamorous girl of her generation. Nicknamed the Last Deb, she is also beautiful, spoilt and out of control. When she agrees to marry dashing young heir Douglas Fairley-Hulme her parents breathe a sigh of relief. But within two years rumours have begun to circulate about Athene’s affair with a young salesman. Thirty five years on, Suzanna Peacock is struggling with her glamorous mother’s legacy. At odds with her father and his second wife, struggling in a stalled marriage, she returns to the place of her birth to find that the ghost of her mother, in differing ways, still haunts them all. The only place she finds comfort is in her shop, The Peacock Emporium, a coffee shop-cum-curio store, decorated in her own image, which provides a haven for other misfits in the town. There she makes perhaps the first real friends of her life, including Alejandro, a male midwife, escaping his own ghosts in Argentina. But the spectre of Athene and the shop itself combine to set in place a chain of tragic events, forcing Suzanna to confront the feelings she has disguised for so long – and her family, in their varying ways, finally to deal with the events of the past. And Suzanna discovers the key to her history, and her happiness, may have been in front of her all along.

After finding a new favourite author in the form of Jojo Moyes, I’m now on a mission to read everything she ever wrote and today’s review is on The Peacock Emporium, published in 2004. Similar to the previous book I read – Foreign Fruit, the story is set in two time frames, the first is in the 1960’s and deals mainly with the fortunes of the aristocratic Fairley-Hulmes family, when the young heir Douglas falls madly in love with a woman he meets at one of their famed parties. Always one to stand out in a crowd, Athene Forster is beautiful and glamorous but also selfish and slightly wild according to the standards of the times. Blinded by her vivacity and spirit Douglas marries her but soon repents as Athene suddenly leaves him to have an affair with a salesman much to her families embarrassment and horror.

Cut to the present day and our protagonist is Suzanna Peacock, daughter of Athene, who hasn’t had an easy life under the shadow of her notorious mother. Her father Douglas re-married again and his second wife has raised Suzanna as if she were her own yet Suzanna has always felt like she did not belong in the family, and that her father preferred her half-siblings as she was a painful reminder of his first wife. On top of this she is also having problems in her own marriage, and does not know what to do for the best. For a bit of a distraction from her problems she puts into action one of her dreams, opening a store called The Peacock Emporium, selling beautiful and unique goods with a little help from some new friends, Jessie and Alejandro who both have skeletons in the closet themselves. When tragedy strikes, Suzanna realises the true meaning of family love and friendship and begins to put into place the jigsaw puzzle of her own life.

As with Foreign Fruit, I loved that part of this novel was set over two time frames. The author does a fantastic job of setting the scene and explaining the history behind the characters whilst knitting together a multi-layered and intriguing plot. Not only did I fall head over heels in love with the story but I thought some of the characters were truly wonderful. Among my favourites were wild-child Athene, the dependable Alejandro, and the troubled but vibrant Jessie. There are so many different strands to this story but I loved how past experiences of each character was blended together perfectly to form a tale with so many important messages about family and looking after the ones you love. You would think that a novel with so many layers may over-complicate things and hinder the reading process but I can honestly say that this was never a factor for me – I just enjoyed immersing myself in the lives of the fascinating people that Jojo Moyes created. Another Jojo Moyes book read, another thumbs up from me!

NEXT JOJO MOYES READ: Her new novel The One Plus One – coming soon!