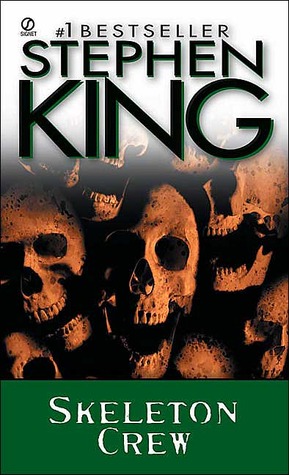 What’s The Monkey all about?:

In this brilliant collection of stories, Stephen King takes readers down paths that only he could imagine. The Monkey tells the story of an eerie little monkey figurine with a great capacity for evil.

The Monkey is the third short story in the Skeleton Crew collection and has to be one of my favourites written by the author (Did I mention I’m a big Stephen King fan?). Our main character is Hal Shelburn and the story opens when one of his sons Petey finds a monkey figurine complete with clashing cymbals and a manical grin in a cardboard box. Hal immediately feels uneasy and frightened uncharacteristically snapping at his son to leave it alone, and the reader gets the sense that something is not right with this ornament. Our suspicions are confirmed when Hal states: “You can’t be here – I threw you down the well when I was nine.”

The reader is then taken back to Hal’s childhood, when the monkey was first discovered and we start to learn how a seemingly inanimate object can fill Hal with such terror. Because when the monkey starts to bang his cymbals together you can be sure that someone will die. This first happens in the middle of the night when Hal awakens to see the monkey on his shelf moving the cymbals together of his own accord and it terrifies him. The next morning, he awakens to read in the newspaper that his babysitter Beulah, whom he was quite fond of has been killed in a shooting. He realises that this happened at exactly the same  time that the monkey was clashing his cymbals together. As time goes on, more people close to Hal pass away and the monkey seems to encourage others to wind it up with glass eyes that are always watching, and a knowing fixed grin. Also, every time Hal tries to get rid of the monkey, it keeps coming back. Now that the monkey has returned again twenty years later from the bottom of the well that Hal dropped it in as a child, Hal knows that he has to get rid of it for good before anyone else he loves succumbs to the monkeys dreadful death toll.

As I mentioned before, this story is one of my favourite King shorts but I had completely forgotten how creepy it was (although just looking at the title brought it all flooding back!). The author has a real talent for giving you shivers up your spine and if the thought of toys coming to life creeps you out this tale will definitely give you the heebie-jeebies. I also enjoyed the way that King brought a human element to the story, with details about Hal’s childhood and the struggles his family are currently facing. This had the effect of making me care more about the characters, and root for an end to the evil monkey! If you are new to Stephen King and don’t mind the eerie and the unexplainable, this story is a great place to start. Fast-paced, exciting and easy to read this is a memorable piece of fiction written in his trademark style that will haunt you afterwards and may make you look at a stuffed toy in a whole new light…

NEXT SHORT STORY: How We Avenged The Blums by Nathan Englander from the collection What We Talk About When We Talk About Anne Frank