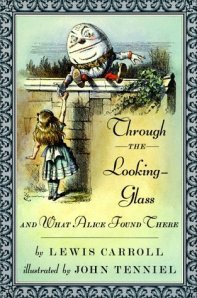 In 1865, English author Charles Lutwidge Dodgson (1832-1898), aka Lewis Carroll, wrote a fantastical adventure story for the young daughters of a friend. The adventures of Alice-named for one of the little girls to whom the book was dedicated-who journeys down a rabbit hole and into a whimsical underworld realm instantly struck a chord with the British public, and then with readers around the world. In 1872, in reaction to the universal acclaim *Alice’s Adventures in Wonderland* received, Dodgson published this sequel. Nothing is quite what it seems once Alice journeys through the looking-glass, and Dodgson’s wit is infectious as he explores concepts of mirror imagery, time running backward, and strategies of chess-all wrapped up in the exploits of a spirited young girl who parries with the Red Queen, Tweedledee and Tweedledum, and other unlikely characters. In many ways, this sequel has had an even greater impact on today’s pop culture than the first book.

The two books which tell the story of Alice in Wonderland and Through The Looking Glass always bring back happy memories for me as I was given for my seventh birthday a beautiful hardback of The Complete Illustrated Works of Lewis Carroll by my aunt, and spent many a happy hour in Alice’s weird and wonderful world. When Chrissi Reads and I decided to do a Kid-Lit challenge in 2013, I knew Alice in Wonderland had to be on there, and now we are repeating the challenge this year, Through The Looking Glass was also a dead cert for the list.

The World of the Looking Glass is even more stranger than Wonderland, if that is possible? When Alice first steps through the Looking Glass, she is faced with a chess board and tiny chess pieces which are very much alive, and a bit wary of this giant “volcano” (Alice) which lifts them up onto a table, giving them a terrible fright. Alice herself remains very much unchanged from the little girl in the first volume, still slightly irritating and incredibly proper, but completely compelling to read about at the same time. Once she becomes immersed in the new world, she realises things are very backward – quite literally – when she finds a book, she has to hold it up to the Looking Glass so it can be read properly. This is the famous and fabulous poem The Jabberwocky which begins:

‘Twas brillig, and the slithy toves
Did gyre and gimble in the wabe:
All mimsy were the borogoves,
And the mome raths outgrabe.’

There does seem to be more of a goal for Alice in this book compared to Wonderland, as she takes the place of the White Queen’s pawn on the chessboard, and is told she must pass through a number of squares, meeting a host of colourful characters before she can become a Queen on the Eighth Square. So Alice’s journey begins, and this is where Lewis Carroll’s imagination really ran riot. We have the peculiar Tweedledum and Tweedledee, a meeting with Humpty-Dumpty (is he wearing a tie or a cravat? Well, it IS hard to tell on an egg I guess!) and an encounter with a rather sinister knitting Sheep. These are just the stand out moments for me, but everything is so unique, a little bonkers, and completely surreal that I think children today might still enjoy this fantastical world. There is quite a lot of poetry in the story, apart from the Jabberwocky there is a lovely little poem about The Walrus and the Carpenter which I remember from my childhood quite vividly. Probably because I felt so desperately sorry for the poor gullible little oysters?

Since reading this book as an adult (and still finding the knitting Sheep quite sinister), I have fallen in love all over again with the magic of Lewis Carroll’s world. I recommend to anyone that hasn’t read it, or hasn’t read it for a while, to give it another shot and enjoy being taken on a radically different journey where flowers squabble between themselves, we have 364 “un-birthdays,” and nonsense is so much better than being sensible!