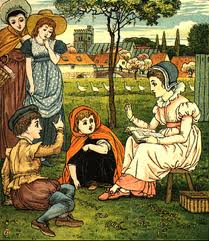 Beth and Chrissi do Kid-Lit is a monthly feature I began with my sister and fellow blogger Chrissi Reads last year. We both chose six books each to represent the twelve months of the year and resolved to read and review one a month. We enjoyed doing it so much last year that we wanted to carry on the challenge for 2014, so without any further ado, here are the twelve lucky titles!

JUNE – The Wind In The Willows – Kenneth Grahame