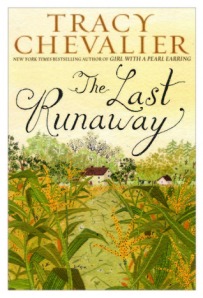 In New York Times bestselling author Tracy Chevalier’s newest historical saga, she introduces Honor Bright, a modest English Quaker who moves to Ohio in 1850, only to find herself alienated and alone in a strange land. Sick from the moment she leaves England, and fleeing personal disappointment, she is forced by family tragedy to rely on strangers in a harsh, unfamiliar landscape.

Nineteenth-century America is practical, precarious, and unsentimental, and scarred by the continuing injustice of slavery. In her new home Honor discovers that principles count for little, even within a religious community meant to be committed to human equality.

However, drawn into the clandestine activities of the Underground Railroad, a network helping runaway slaves escape to freedom, Honor befriends two surprising women who embody the remarkable power of defiance. Eventually she must decide if she too can act on what she believes in, whatever the personal costs.

CHRISSI: Did the opening chapter pull you in?
BETH: Completely. The first chapter introduces our main character Honor Bright, who is leaving her home in England to embark on a sea voyage to America with her sister Grace who is recently married and is joining her husband out there. Unfortunately, her new life does not begin too well as Honor is desperately sea-sick on the journey. This is a wonderful introduction to a stunning piece of historical fiction in my opinion, and I couldn’t wait to see how the story would continue.
BETH: How did you think the slavery issue was dealt with in this novel?
CHRISSI: I think it was dealt with well. It was interestingly portrayed. Tracy Chevalier covers the politics of slavery in a sensitive manner. She highlighted the moral dilemmas faced by those who opposed slavery but were too afraid to help due to the laws of the time.
CHRISSI: Did the use of religion put your off or was it handled well?
BETH: Normally, if a book “harps on” too much about religion, it puts me off completely however I did not feel this way about this book at all. In fact, it made me more intrigued, and I found I wanted to learn more about the Quaker faith by the end, especially in the way that complete silence is advocated and encouraged.
BETH: What did you think of Donovan as a character?
CHRISSI: I found Donovan to be a memorable and believable character. I’m completely undecided about how I feel about him. I was always interested when he appeared in the story.
CHRISSI: What did you think of Belle as a character?
BETH: Belle is a wonderful character. She is the first person who really helps Honor when she first arrives in America and gives her somewhere to stay, encouraging her talent in quilting and bonnet making. I also enjoyed the way Belle came into her own regarding runaway slaves, and I admired her morals and values.
BETH: What did you think of the relationship between Honor and Donovan? What do you think her true feelings are towards him?
CHRISSI: I really liked the relationship between Honor and Donovan. Right from the start I thought there was a spark between them. I think Honor really liked him despite his bad ways.
CHRISSI: Did you like the use of letters in the book?
BETH: I loved them. I found it was a nice break between the chapters, and felt I learned more about the characters than I would have done if the letters had been omitted. I would have liked to have letters from other characters rather than Honor, especially Donovan who was such an intriguing personality.
BETH: Why do you think Honor feels she cannot go back to England?
CHRISSI: I think Honor feels obligated to stay in the US as her sister was meant to be there. It’s almost like she wanted to be there for her sister and by going home she would be seen as a failure.
CHRISSI: What did you think of Honor as a protagonist?
BETH: Honor was one of my favourite characters in the book. We see her strength and forbearance when dealing with tragedy and her determination as she tries to integrate herself with the American Quakers, despite the difficulties. I also admired her morals and ethics when trying to practice her religion in the way that she sees fit.
BETH: Have you read anything else by this author? Would you read another?
CHRISSI: I’ve read Girl With A Pearl Earring which I really enjoyed. I’d definitely read more from Tracy Chevalier.

Hey everyone, hope your week is going well so far! It’s time to share the next five physical books on my TBR. I’m loving that I’m managing to get to so many of the older reads on my shelves this year so far and am joining in with @emmasbookishcorner #newyearoldreads challenge to try and get to them even quicker! I’m especially looking forward to reading my first Penguin clothbound classic - Jane Eyre which also happens to be one of my favourite classics. Have you read any of these? I’d love to know what you thought! #bookstagram #bookworm #tbrpile #childrenofbloodandbone #tomiadeyemi #penguinclothboundclassics #janeeyre #charlottebronte #washingtonblack #esieougyan #wheniwasinvisible #dorothykoomson #mylovelywife #samanthadowning