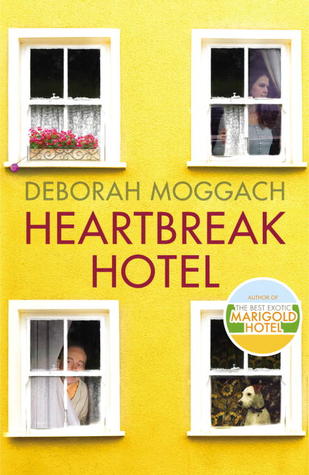 The irrepressible Russell ‘Buffy’ Buffery has upped sticks from London and moved to a decrepit B&B in rural Wales. He needs to fill the beds, and what better way than with ‘Courses for Divorces’, his new money-making wheeze.

Those checking in include: Harold, whose wife has run off with a younger woman; Amy, who’s been unexpectedly dumped by her (not-so) weedy boyfriend and Andy, the hypochondriac postman whose girlfriend is much too much for him to handle.

Under Buffy’s tutelage, these casualties of the marriage-go-round find themselves re-learning all those skills never thought they’d need again, and a whole lot more besides…

This book was chosen as part of the Richard and Judy Summer Reads 2013.

CHRISSI: What were your first impressions of this book?
BETH: I found this book very promising at the start, it seemed to be written with very “real” people, which was quite refreshing, and I enjoyed the way that we had multiple points of view, even if I did find myself saying at times: “Now who are they again and what’s their story?!” Having previously read the author’s book These Foolish Things/The Best Exotic Marigold Hotel and reviewed it with you, I was comparing it to that, and on some levels, it was quite similar.
BETH: How does the title “Heartbreak Hotel” relate to the story we are told?
CHRISSI: I think it’s a good title for the story, because it does relate to a lot of the central themes of the book. A lot of the themes that came through for me whilst reading were insecurities, depression, infidelity and loneliness. Definitely issues that cause heartbreak.
CHRISSI: Are there too many characters to follow in this book? Do we get the chance to know them well enough?
BETH: There are a LOT of characters in this novel, and I did enjoy all the different points of view but I do think we probably didn’t get to know them well enough to make them believable, or for the reader to connect with them properly. We do hear a lot more from Buffy, our main character, who is arguably the most important, and I did enjoy his take on life.
BETH: Which of the characters was your favourites (if any) and why?
CHRISSI: I think my favourite was Buffy, and this is only because we seemed to hear a lot more about his story than the other characters. For me, there were far too many characters and points of view. I think I would have enjoyed this book much more, had it focussed on just a few characters.
CHRISSI: How well do you think Deborah Moggach portrayed male characters? Were they believable?
BETH: Buffy is quite a loveable character, and as an actor a bit of a “luvvie,” I think. He had some quite humorous parts, like when his BAFTA was being used by one of the guests to prop open a door (shocking!). I think the author captured the male voice quite well in a number of different personalities, like poor Harold whose wife has run off with another woman, and Andy the postman who really DOES enjoy delivering the mail.
BETH: Was the author successful in her portrayal of middle-aged relationships?
CHRISSI: I think she did portray middle-aged relationships well. I find with Deborah Moggach that her characters are incredibly real and ordinary. They are very like people you may know already in your life.

CHRISSI: No, it wasn’t for me.