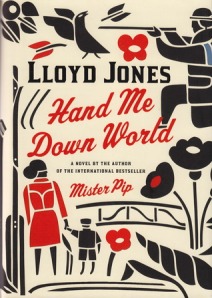 A woman washes ashore in Sicily. She has come from north Africa to find her son, taken from her when he was just days old by his father and stolen away to Berlin. With nothing but her maid’s uniform and a knife stashed in a plastic bag, she relies on strangers— some generous, some exploiting—to guide her passage north.
These strangers tell of their encounters with a quiet, mysterious woman in a blue coat—each account a different view of the truth, a different truth. And slowly these fragments of a life piece together to create a spellbinding story of the courage of a mother and the versions of truth we create to accommodate our lives.
Haunting and beautiful, Hand Me Down World is simply unforgettable.

The author of this book, Lloyd Jones, also wrote the bestselling novel Mister Pip, which I have been meaning to read for some time now. But this story as an introduction to the author’s style, was a welcome treat. The main character of the book is a woman who calls herself Ines (for reasons we find out later) and is searching for her son, stolen away by his father shortly after his birth. However the first two-thirds of the book are told from the points of view of a handful of people that she came into contact with, and who seem to have been greatly affected by knowing her, or being in her presence, however brief. We have the supervisor who worked with her, the truck driver who mistook her for a prostitute, the hunters who almost shot her, the Frenchman who fell in love with her, the blind man and the lodger. The time sequence also hops around slightly which made the book all the more interesting for me, as the reader tries to figure out the exact sequence of events. Throughout the story we learn about Ines’ grim determination to find her son whatever the cost, and in some cases, it seems to cost her a lot, however giving up is never an option.

As I have mentioned, I loved that the book was told from the point of view of many voices, to give us a full, and sometimes confusing, picture of who Ines really is. In the final third of the story we hear Ines story, in her own words, and it is the first time that it is suggested that the testimonies of the other characters may be on the false side. Now I’m thinking I’m going to have to re-read the book to re-evaluate everything I believed in the beginning! What really pulled me into the story though was the writing style which was so beautiful to read, and kept me turning the pages, desperate to know what was going to happen next. Ines was definitely one of the more complex characters, but I also enjoyed reading about the blind man and the lodger, along with the difficult and inter-connecting relationships between the three. Clever and intriguing, I think I shall read your Mister Pip, Lloyd Jones!

2 comments on “Hand Me Down World – Lloyd Jones”