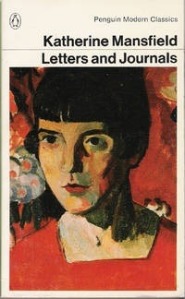 This book contains a selection of letters and extracts from Katherine Mansfield’s journal. The book looks at the “tremendous trifles of life” – the funny, ridiculous and exasperating – as well as inhabiting a dimension that transcends the everyday. “The Letters and Journals of Katherine Mansfield” demonstrates how the author comes to terms with the problems of living and dying, pain and fear, loneliness, with her own creativity, with friendship and above all with the enduring love she had for her husband.

I didn’t really know too much about Katherine Mansfield until earlier this year, when I noticed that her name kept cropping up in books I was reading. Then a book group that I participate in picked the book Mansfield by C.K. Stead, which is a fictionalised account of Katherine’s life, to read one month. I wasn’t entirely sure about that book (please see my post HERE), but it is only since reading the Letters and Journals, that a few pieces have slotted into place. Katherine Mansfield was originally from New Zealand, but spent a lot of her time in England and France, where she felt that she completed all of her best writing. She became famous mainly for her short stories, but also for her friendships with other literary persons such as D.H. Lawrence and Virginia Woolf, the latter being responsible for publishing some of her work. She contracted tuberculosis, which plagued her and left her bed-ridden at times, and led to her death at the untimely age of 34.

Unfortunately, I cannot really comment on Mansfield’s short fiction, haven’t not read any of it at the moment, but I plan to change this very soon. From her letters to her second husband Murry, and her journal entries, she comes across as a bright, vivacious, and entertaining person, with a beautifully descriptive way with language, even in her own private words. I particularly love the poem she wrote about her beloved brother, Leslie “Chummie” Beauchamp after he was killed in the war, fighting in France. The ending lines are particularly poignant:

By the remembered stream my brother stands
Waiting for me with berries in his hands…
“These are my body. Sister, take and eat.”

I think Katherine was an incredibly complex yet interesting person on the whole. She was clearly passionate about the people she loved, but appeared to be slightly flighty, and could switch loyalties as she chose. She separated from Murry a few times, although he certainly was the love of her life, and had some brief affairs which she seemed to plunge into feet first. I loved reading about her friendship with D.H. Lawrence, who used Katherine as his inspiration for Gudrun in his novel Women In Love, his fiery personality and tempestuous partnership with his wife was fascinating to read about. Although I did enjoy the writings of Katherine Mansfield, I probably wouldn’t read this book again, in parts it was fairly disjointed and difficult to take in, although I appreciate that sometimes it’s incredibly difficult to place letters in exact sequence of events! I will definitely try and slot in some of her work, as she seems to have captured my interest.