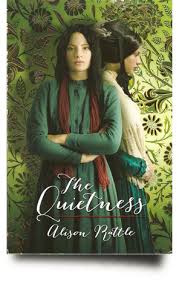 When fifteen-year-old Queenie escapes from the squalid slums of nineteenth-century London, she has no idea about the dangers of the dark world she is about to become embroiled in. Initially thrilled at being taken on as a maid for the seemingly respectable Waters sisters, Queenie comes to realise that something is very wrong with the dozens of strangely silent babies being ‘adopted’ into the household.

Meanwhile, lonely and unloved sixteen-year-old Ellen is delighted when her handsome and charming young cousin Jacob is sent to live with her family. She thinks she has finally found a man to fall in love with and rely on, but when Jacob cruelly betrays her she finds herself once again at the mercy of her cold-hearted father. Soon the girls’ lives become irrevocably entwined in this tension-filled drama. THE QUIETNESS is a novel of friendship and trust in the darkest of settings.

I was recommended this book by my sister who absolutely loved it so I was intrigued to discover what it was like. Well, I definitely was not disappointed. The Quietness is a beautifully realised and original piece of work that has a bite of real history behind it. The author introduces us to two sisters that actually existed in Victorian England and were known collectively as the “Brixton Baby Farmers,” who were responsible for the deaths of nineteen infants by starvation.  Our main characters, Ellen and Queenie become embroiled in this nasty business when Queenie is employed as a maid for the sisters under false pretences, unaware of what is really going on. Ellen, on the other hand becomes a “fallen woman” when she becomes pregnant and is sent to the sisters’ house in disgrace by her father, a prominent anatomist to have her bastard child in secret. During this time period, an unmarried pregnant woman was an abomination, and abortions were not only illegal but highly dangerous due to unsanitary “back-street” methods.

Of course, there is much more going on in this book then meets the eye involving both girls families, Ellen’s pregnancy and a hidden secret but I don’t want to give anything away. The author does a terrific job of alternating the narration between both main characters and keeping the story alive and fresh. “The Quietness,” can be interpreted many ways – it is something Queenie longs for in her family yet in Ellen’s family it is something that she seems to have an abundance of. It refers to the babies in the house, and also has a physical connection with an object used in the novel. As a historical novel for young adults, I think it has passion and depth and will definitely succeed in making people more interested about our past, and I thoroughly enjoyed it.

2 comments on “The Quietness – Alison Rattle”